In the opening scene of the fourth film, a blazing petroleum tank pins Domenic Torretto (Vin Diesel) at a cliff’s edge as it barrels downhill toward him. He accelerates, slipping his car under the inferno as it bounces over his hood. As if on cue, every time Dom skids to a stop, I burst into tears

The Fast & Furious movies aren’t known exactly as “tear jerkers.” The series is famous for its brilliant-to-the-point-of-absurdity stunts, its drinking-from-the-fire-hydrant viewing experience. Even if you’ve never seen Furious 7, you’ve probably heard about the scene in which cars launched paratrooper style out of a cargo plane.

But in this series, emotions are the greatest stunt of all. What makes the series pure gold, what makes me cry as a CGI tanker explodes, are its earnest underpinnings. “Family,” chants the cast, Greek chorus-style between stunts. And nowhere is that injection of sincerity more potent than in the first film, The Fast and the Furious. 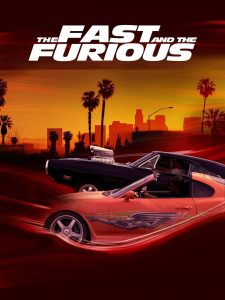 The 2001 original owes a great debt to Point Break, by which I mean its plot is an almost exact duplicate. Undercover cop Brian (Paul Walker at peak blondeness) infiltrates L.A.’s street racing community to expose a ring of truck hijackers. But not that kind of hijacker: they drive Honda Civics and lift Panasonics. Stripped of the spector of global terrorism that has haunted the genre since 9/11 and influenced the series over time, the stakes are confined to the particularities of place. L.A.’s skyline crowns the background of every setting shot, each set piece a landmark.

You might even forget about the hijacking plot because what actually matters to the story is whether Dom will accept Brian into his circle of trust. Cars are the literal vehicle through which they negotiate their relationship. Because it’s a series about cars, right? Fast cars. Furious even! Even the cars have feelings, or are feelings. Before Brian utters his first line, he revs his engine. The action genre negotiates male friendship through objects (read: usually women), but The Fast and the Furious tweaks this dynamic. Racing isn’t where characters displace their affection, it’s where they prove it. 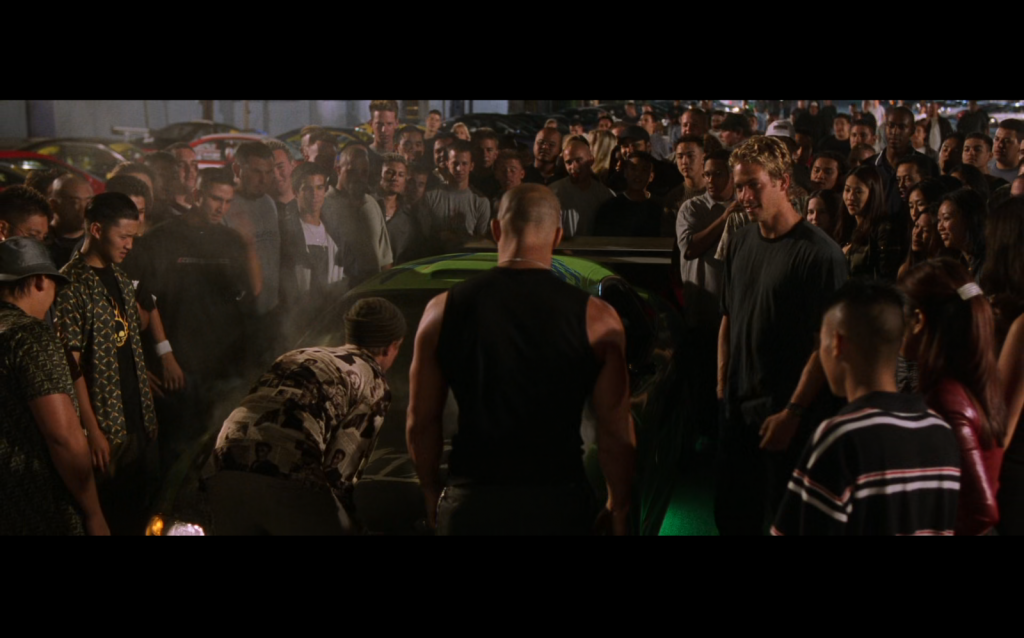 In the first street racing scene, Brian wagers the title of his car for the chance to race Dom and win his respect. The heavily foreshadowed outcome arrives at pace: Brian uses too much NOS (“Amateurs don’t use nitrous oxide!”) and Dom wins (“When Dominic drives, he’s golden!”). Brian emerges from the car giddy, certain he’s proven himself by almost winning. But almost winning doesn’t matter, the car matters. Dom muses, “You never had me. You never had your car,” and fires off a litany of mistakes Brian made, punctuated with “ohhhs” from the crowd. Before Brian is worthy of the affection of Dom, he must prove his capacity to care for his car.

The queer aesthetics of male bonding and rivalry typify the genre (see: Fight Club, Point Break, Top Gun, etc.). I would be lying if I said there wasn’t a trace of that here. It’s hard not to register the chemistry between Vin Diesel and Paul Walker, chemistry that would catalyze a multi-billion dollar series, as more than a touch romantic. But The Fast and the Furious works to redirect the tension through another queer modality: the found family. Dom’s inner circle is composed of Mia (his sister), Letty (his girl), Jesse (the car guru), and Vince and Leon (indistinguishable, there to start shit). Brian, the newcomer, of course triggers a rift. But it’s fleeting because deep trust and affection define the family.

When the race is busted by cops, everyone scatters, leaving Dom in a footrace against police, who of course recognize him. Brian scoops up Dom and loses the cops through some of the film’s most impressive stunt driving. Returning to the family residence, Dom invites Brian in for a beer. The set up of the scene oozes machismo (after all, it’s a houseparty after an illegal street race). Dom walks in, grimaces, knocks a beer out of Leon’s hand, and strides over to Vince, who is also grimacing and finishing a guitar solo. But the tone of the scene shifts when Dom speaks– “Where were you?” he asks Vince. He takes Vince’s beer and delivers an outburst in the strained exasperation of someone acutely wounded.

The promise of sharing a beer sets this scene up as one of male bonding, but the lacquer of betrayal and pain deepens the relationship dynamics. The next time they share a beer is over a cookout: Vince, who has been ostracized, returns. The family, forgiving one another over the dinner table, comes together to help Brian build a “10-second car.” Once again, the car and the family — the feeling — coalesce.

Though the movie stands no chance at passing the Bechdel Test, there’s something deeply gratifying about a film where women are just there. Clad in crop tops and low-waisted mini skirts, the ladies of the racing scene know the currency they’re working with. A particularly reductive exchange tranfixes me. Before the first race, Edwin (played by gravel-voiced, pre-Fyre Fest Ja Rule) is propositioned by a woman who leans into his car window. She pushes his hand on her breast and promises, “This is yours, whether you win or lose. But if you win, you get her too,” nodding toward her crop-topped friend. When Edwin inevitably loses, neither woman is “his.” If acting holds a mirror to life, this trick mirror presents a reality at once depressing and aspirational. A frustrating trope of dating men is hanging out on the sidelines. I, too, have put on a miniskirt to watch a guy I like do something he likes more—cars, video games, guitar. You get my point. But to own it, to giveth the boob and then taketh away, resonates with (what functions under patriarchy as) power. 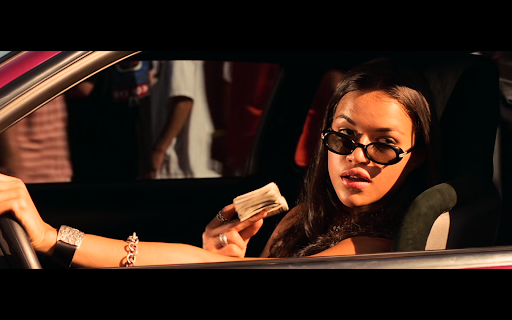 Protected by the sheen of the family, Letty (Michelle Rodriguez) and Mia (Jordana Brewster) grasp more agency through, of course, cars. Letty, skilled as a mechanic and driver, embodies the “not like the other girls” girl. Permanently covered in car grease, Letty scowls as much as Dom. I relish a scene where she beats a catcaller (“How bout I race you for that sweet little ass?”) after agreeing to only race for cash–exchanging one currency for another. Mia, Brian’s romantic interest, is the closest to being a “vehicle” through which Dom and Brian negotiate their relationship. But she too flaunts her own driving skills to flirt with Brian.

Ultimately, the charge between cars and emotion builds to an iconic final scene. Brian blows his cover calling a medivac for Vince after a heist gone south (yes, the family runs the truck heists). Through a series of inactions followed by a chase with a rival motorcycle crew, Dom and Brian safeguard the family. Ultimately, they pull up side-by-side to a stoplight and Dom looks at Brian with eyes that say, “I’m not mad, I’m just disappointed.” Dom offers a race to a train track exactly one quarter mile away. Neck and neck, the crossing gate starts to fall. The cinematography is serious as a heart attack: in slow motion, Brian and Dom glance at each other, accelerate, and jump the tracks in tandem barely missing the train.

It’s a visual that elicits a fist pump and eye roll at once, and the whiplash from exhilaration to tenderness never fails to make my heart clench. It’s a car race, it’s ecstasy, and it’s something like a crowning. When Brian shows he’s fully willing to ride or die with Dom, a family and a series are born.

Kayla Meyers is no longer a horse girl, but not yet a horse woman.