In director Richard Benjamin’s 1990 film Mermaids, Winona Ryder plays Charlotte Flax, a fanatical 15-year old obsessed with both the saints and sex. It’s a classic divide, this line between piety and pleasure that Charlotte zigzags across, all the while praying to remain safely lodged within the former in order to avoid the consequences of the latter.

“Mary didn’t even kiss Joseph and look what happened to her,” she worries in one of her fervent voiceovers.

There’s a lot to like about Mermaids, not just the amazing holy-trinity casting of Winona Ryder, Christina Ricci, and Cher. There’s a lot to like about the character of Charlotte, too, especially for me, a fellow former hyper-religious, hyper-repressed teen. Like my younger self, Charlotte’s religious fervor makes her awkward with peers; like my younger self, Charlotte worries about pregnancy before she’s even had sex. And she possesses a self-centered conviction that God responds in real-time to her actions, a belief that I still haven’t fully lost, even after leaving the evangelical Christian church. But what I love most about Mermaids and Charlotte is the examination of the space between purity and pleasure that both provide. As Charlotte walks the line dividing piety and desire, faith and sex, morality, and her hormones, she reminds us that there isn’t a single moment when the body magically awakens. She champions sexual development and scrambles the pure/impure binary often seen in the evangelical church and teen coming-of-age movies. Growing into anyone’s sexuality, Mermaids suggests, takes time.

At the beginning of Mermaids, Charlotte, her mother, Rachel (Cher), and her younger sister, Kate (Christina Ricci) have just moved to a small Massachusetts town to escape Rachel’s latest failed romance. Their new home sits next to an abbey where Charlotte’s twin fixations with God and sex collide; it’s here where she meets 26-year-old Joe, the abbey’s sad-eyed caretaker, and kisses him in the nunnery’s bell tower on the day of JFK’s assassination, sharing a lip-lock so passionate that, afterward, she fears she’s pregnant. And it’s here where, eventually, Charlotte and Joe have sex in a wine-drunk rendezvous that precedes the movie’s happy ending — a peppy Flax family dance scene featuring a new-and-improved Charlotte who has swapped her religious and sexual obsessions for one with Greek mythology.

My own first kiss was very different from Charlotte’s. When she and Joe kiss, it feels life-changing, with the abbey’s concrete saints peering down in wide-eyed wonder and judgment. In my case, I was 18, about to go to college, and my first boyfriend and I were standing on the dirty shore of a lake that people in my North Georgia hometown say is haunted. The evening was humid and I was already feeling slimy, sweaty, and gross when he leaned over and kissed me, his lips in a flat, tight line. The kiss was dry, his body was stiff. Only our mouths touched. When he pulled back from the not-kiss, his face looked distraught and mine probably did, too. We both knew from movies that this wasn’t how a kiss was supposed to feel. And though I laughed it off and told him not to worry, that we would figure it out, when he dropped me off at my parents’ house that evening I cried because I’d wanted my first kiss to be more romantic, more like Charlotte’s.

The sexual ethic that this now ex-boyfriend and I were both raised with is simple and clear-cut: Sex is dirty, sinful, and dangerous before marriage but, after marrying someone God picks just for you, it is transformed into a divine gift, something God smiles upon. You read a lot about evangelical prohibitions on sex, but less about how those prohibitions fit into other teachings. I wasn’t just taught that virginity was devastatingly easy to lose; that one too-passionate kiss could land me pregnant and damned. Almost more damaging was the teaching that marriage, or at least total, monogamous commitment, would magically convert sex from a sin to a saintly activity. The idea that sexuality happened all at once, cleanly, and without any learning curves.

What lies between purity and pleasure? In the church of my childhood and adolescence, I thought there was nothing there. But as I began to experience life post-evangelicalism, I found that there was very much something between my virginal high school self and a self that was able to experience sexual pleasure. Saying that it’s not about the destination but about the journey sounds trope-y and sentimental but in this case, it’s true. My sexuality has been emerging over years of awkward kisses, bad dates, slow dances, missed signals, and incognito Google searches — how to kiss, early signs of pregnancy, Planned Parenthood free birth control options — that I’ve pieced together into a messy, patchwork sexual education.

And that’s why the most meaningful scene for me in Mermaids isn’t the narrative climax, which aligns with Charlotte and Joe actually having sex. Instead, it’s the scene when Charlotte and Joe kiss passionately as the bells toll the news of JFK’s assassination and the eyes of the tower’s saint statues drill into their tangled figures. It’s this kiss that pushes Charlotte to believe she’s pregnant and that changes her young saintly life forever. What I love about this on-screen kiss is that Mermaids’  filmmakers treat it with just as much gravitas and importance as the sex scene that comes later. We spend almost equal screen time with both scenes, and the audience feels that the events are similarly earth-shattering, similarly guilt-inducing, similarly pleasurable. And this is what Charlotte feels, too; after all, it’s after the kiss, not the sex, that she fixates on God’s punishment for her sin, starves herself with penitent fasting, and begins to believe she’s been divinely impregnated.

Three months after the first kiss that fell flat, I made out with the same boy from the lake in the parking lot behind a movie theater, unzipping the red Peter-Pan collar dress I’d bought on clearance at Urban Outfitters and letting him see my ratty, A-cup bra for the first time. I like to think about this moment as my “first time,” because I chose to unzip my dress. I did not choose to have sex when my actual first time occurred in the same boyfriend’s childhood bedroom nearly two years later. What happened between me and my boyfriend that day is different than what happens between Charlotte and Joe; my desire wasn’t any way a part of it. But Charlotte helps me recognize what happened in my life afterward, after the boy dropped me off at my family’s house when I hurtled into a very Charlotte Flax-like period of hating myself and waiting on God’s punishment. I worried over my period so intensely that, quite perversely, it delayed itself due to my stress and I came to believe there was a phantom baby residing inside my body, a plight that — like Charlotte — I had found my self in before having sex and was now experiencing after, this time with more realistic stakes.

Growing up, I learned in church that godly women are cleaved into two groups based on marital status; if single, a woman should be a snow-white virgin, but after marrying, she should quickly shape-shift into a hyper-sexual vamp who is willing and able to fulfill her husband’s every desire. We see this zero-to-one-hundred take on sexual awakenings outside of evangelicalism, too, wrapped up in arcs that sometimes swap marriage for losing one’s virginity but that drive home an identical narrative of first-time sex as a magical, transformative act. We watch as the shy, sweet virgin becomes a woman onscreen thanks to an instance of life-changing sex with her older dance instructor (Dirty Dancing), or the local stereo salesman (Fast Times at Ridgemont High), or a tortured vampire (Twilight: Breaking Dawn). 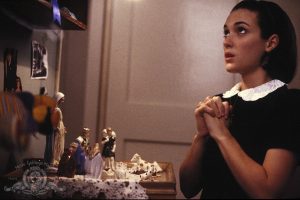 But as Mermaids knows, this idea — that awkward virginity could quickly metamorphose over the course of one encounter into sexual prowess —  creates dangers up and down the line. It ignores the development and education crucial to enjoyable sex. It collapses any notion of human complexity, refusing to allow innocence and sexuality to live together in the same being. It doesn’t give Charlotte Flax room to pray fervently and fantasize about Joe at the same time. It doesn’t give my younger self space to be simultaneously innocent and desiring, as I was that night in the movie theater parking lot. And it doesn’t permit both the awkward boy at the lake and the callous boy in the bedroom to co-exist within the body of my ex-boyfriend.

Three decades after its release in December of 1990, Mermaids is now a little dated. I find it uncomfortable and predatory that Joe kisses, hangs around, and has sex with Charlotte, a minor who is 11 years his junior. And the movie has plenty of corny dialogue. But its thorough exploration of Charlotte and her weird, tangled journey through adolescent love, religion, and sex distinguishes it, for me at least, from scores of other teen sexual awakening films.

And I like that Mermaids gives us detail on Charlotte’s sexual development — a tortuous trial-and-error process that reminds me of my own dramatic, Christian adolescence — instead of relying on the tired, unrealistic narrative of virgin-suddenly-turned-vamp. It’s this rare exploration of the space between purity and pleasure where I lose track when watching Mermaids—does this blundering, angsty journey through sex and religion belong to Charlotte, or does it belong to me?