Julia Quinn’s Bridgerton novels are mostly populated with white people like the regency-era England where they take place. The London of Shonda Rhimes’s Bridgerton tv series for Netflix, in contrast, is a multicultural mecca, sprinkled with Black characters of various skin hues, as well as a smattering of east and south Asians walking around silently in the background. There is even a Black queen and a Black duke.

In the world of fiction—whether on the page, stage, or screen—such ahistoricity does not necessarily have to be an issue. We should not evaluate a work of art by how well it matches reality, or how faithful it is to history. But a work of art can and should be judged by the inspiration behind its creator’s vision. And this is where Bridgerton has a Caribbean problem. 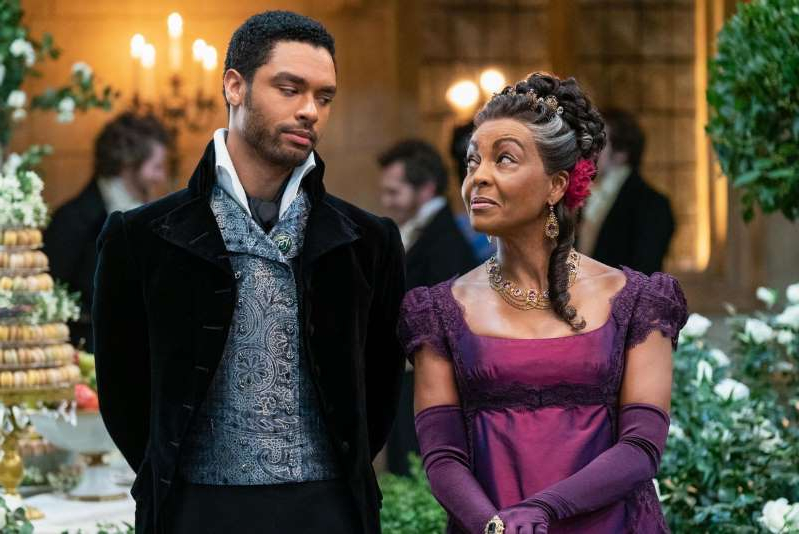 In season one, episode four, we learn that the reason the Black Brits of Bridgerton are on par—economically and socially— with the white characters is not because they are the mixed-race children of white male British colonists and free women of color from the Caribbean, nineteenth-century England’s actual Black children of “uncertain fortune,” in one historian’s words. Instead, it is because the white king, George, fell in love with a Black woman, Charlotte, whose marriage to him made her the Queen of England. “We were two separate societies, divided by color until a king fell in love with one of us,” Lady Danbury explains to the Duke of Hastings. “Love… conquers all.” Cynical, the Duke replies, “The king may have chosen his queen, he may have elevated us from novelties, in their eyes, to now dukes and royalty, and at that same whim, he may just as easily change his mind….Love changes nothing.”

Yet in Bridgerton love has already changed everything. It has defeated color prejudice and it has eliminated chattel slavery. Likewise, it has erased any need to mention the thousands of Black revolutionaries in Haiti who fought for abolition for 13 long years, in the process creating the first independent and slavery-free nation of the American hemisphere.

Period romances like Bridgerton are designed to appeal to those who seek to lose themselves in the sumptuous visual pleasures characteristically offered in representations of nineteenth-century British royalty on screen. While I understand the impulse many Black people share, to see ourselves represented in this genre that has traditionally excluded us, contrary to what television usually features, an awe-inspiring world of Black nobility did actually exist in the nineteenth century.

In fact, watching how Bridgerton uses uncanny blackness in a desperate attempt to fill the void left by the overwhelming whiteness of Quinn’s novels, I kept thinking how easy it would have been instead to draw upon the many complexities of elite Black life in the nineteenth century—the kind that was at the heart of the Caribbean’s only modern Black kingdom. Created by Henry Christophe, a former general of the Haitian Revolution, Haiti’s first and last king reigned over the northern part of the country for the entire period commonly defined as the regency: 1811 to 1820.

If people want to see Black aristocracy on screen, then why not just put them in nineteenth-century Haiti where they really lived?

On June 2, 1811, Henry Christophe and his wife of 17-years, Marie-Louise Coidavid, as well as their seven-year old son, Prince Victor-Henry, rode into their coronation on a carriage pulled by 8 horses. Their teenage daughters, the royal princesses, Améthyste and Athénaïre, were in a separate carriage pulled by 6 horses. The coronation took place as a mass that was presided over by a white French Catholic priest from Brittany, Father Corneille Brelle, who donned Queen Marie Louise and King Henry with two diamond-studded crowns.

Everything about the event lends itself to the kind of spectacle television loves. The inside of the church, specifically constructed for the occasion, was entirely covered with silk shrouds the color of celestial blue. The fabric had fringes of gold, sprinkled with stars. According to the court recorder, King Henry’s throne was perched on an enormous platform that was 70-feet tall and 30-feet wide. It sat under a canopy of crimson silk, embroidered with a gold phoenix. Christophe’s coat of arms contained yet another gold phoenix in the middle that read, “I am reborn from my ashes.”

After the coronation, a magnificent party took place with more than 600 people in attendance. The people of Haiti were encouraged to look on from outside and were reportedly spontaneously cheering, Long live Henry! Long live the Royal Family! Later, Henry gave a toast to the King of England, “my dear brother, King George III,” and asked God to permit his fellow monarch to “always be an invincible obstacle to the unbridled ambition of Napoléon.”

Imagine, too, what it would be like to see Hollywood bring to life Christophe’s famous palace.  Called Sans-Souci (meaning “without worry”), the castle was completed in 1813, exactly the year season one of Bridgerton is set. Designed by German architects, Sans-Souci—which some say is named after Frederick the Great’s palace in Potsdam—contained a unique domed church, a dramatic double staircase flanking its entryway, several arcs de triomphes, large columns with etchings praising the royal family, elegant gardens amid lush greenery and fountains, as well as two painted crowns, one for the king and one for the queen, both of which stood at sixteen-feet tall. Considered a marvel of architectural genius, the palace’s ruins have been designated a world heritage UNESCO site.

Sans-Souci was the perfect place for the opulent revelries for which the kingdom would become famous. In August 1817, Queen Marie-Louise celebrated her annual fête with a party that lasted for 12 days. The lighting for the celebration might have rivaled the dazzling lightshow viewers of Bridgerton witnessed in episode one. “The palace and the city of Sans-Souci were superbly illuminated,” the kingdom’s official newspaper reported. “Several pyramids had been constructed and were lit up by thousands of lanterns reflecting a thousand different colors.”

Nearly every occasion—from weddings, to funerals—was celebrated with similar pomp. On the 16th-anniversary of Haitian independence, for example, the king and queen of Haiti invited the nobility to an opera, whose Creole-language songs were danced to with the calinda and the samba. But little did any of their guests know this was to be the kingdom’s last independence-day.

On October 8, 1820, King Henry committed suicide in the wake of a conspiracy formed by members of the Haitian aristocracy who sought to join the rival republic in the south ruled over by the king’s enemy, President Jean-Pierre Boyer. As heir to the throne, Prince Victor-Henry was executed 10 days later. Not long after, Queen Marie-Louise and her daughters fled the now unified Republic of Haiti, first relocating to London, where they initially stayed with the famous British abolitionist Thomas Clarkson and his wife, Catherine Buck. A real Black queen taking up residence in England did not fail to cause scandal.

The Clarksons were friends with William Wordsworth, author of the famous sonnet, “To Toussaint L’Ouverture,” and his sister Dorothy. However, when Dorothy wrote a letter to Mrs. Clarkson in October 1822 containing a racist poem mocking Queen Marie-Louise— “Sable princess, ebon bright”— the Clarksons stopped speaking to the Wordsworths. Unable to reconcile with the climate, both racial and environmental, Marie-Louise opted to take her daughters and spend the rest of her long and solemn exile in Italy.

While fiction does not have to be realistic or historically accurate to be enjoyable, Bridgerton’s creators clearly knew they could not have rich Black nobility frolicking around racist nineteenth-century Britain without an explanation. But with endless creative choices available, why hinge the intrigue of the Black casting so tenuously on the facile suggestion that it was the real-life marriage between George III and Queen Charlotte (who is reputed to have had some very distant African ancestry) that ended slavery for the Black people of the British West Indies, when in that same historical reality it took Toussaint Louverture and an entire army to produce that outcome for their French Caribbean counterparts?  With all its expensive clothing and jewelry, and its beautiful and probably award-winning set design, Bridgerton’s prettiest trick may just be that it gives interracial love a power it has never had: to create freedom and equality for Black people.

That Rhimes got the green-light for a program that centers romance between Black and white people in nineteenth-century England might still seem progressive to many. Yet, to me, there is nothing particularly provocative or pathbreaking about taking an existing novel’s white characters and simply making them Black. Hollywood has already given us such reversals many times over with films that feature Black Annie and Black Cinderella.

No, what Bridgerton ultimately offers is a shallow representational ruse, one that promises the power of original and creative storytelling only to deliver mere visibility—Black actors inserted into a white storyline. Indeed, what looks like a step forward might actually be a step back, especially, if it encourages more Hamilton-esque colorblind “inclusion.”

As I indulged in the spectacle of Bridgerton myself, I couldn’t stop thinking about what Hollywood still refuses to show us: a luxurious nineteenth-century Black kingdom created by and for Black people. And I fear that Bridgerton, by having taken up precious industry space with a fantasy of Black aristocracy in England, might in the end make it harder to produce a series about real-life Black aristocracy in the Caribbean.

It’s too bad because we really could have it all. The Kingdom of Haiti had what everybody likes about aristocratic period dramas—love, loss, and betrayal, along with tons of bling—but with actual historical depth and ample material for cultural and political reflection.

Marlene L. Daut is Professor of African Diaspora Studies at the University of Virginia and the author of Tropics of Haiti: Race and the Literary History of the Haitian Revolution in the Atlantic World, 1789-1865 and the forthcoming, The First and Last King of Haiti (Knopf/Pantheon).