Books You Should ReadPopular FictionsTeacher, Teacher

Moby Dick, that magnum opus of American literature, famously contains no women. (They are in the background but not part of the action). But it does have breastfeeding. 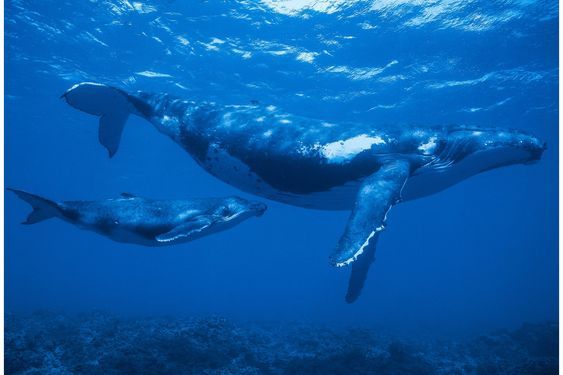 In chapter 87, “The Grand Armada,” the sailors of the Pequod chase a sperm whale (actually, they are pulled along by a whale that Queequeg, the harpooner, has successfully darted), and this whale pulls the little skiff out into a very special space. The narrator describes the location with awe:

“In this central expanse the sea presented that smooth satin-like surface, called a sleek, produced by the subtle moisture thrown off by the whale in his more quiet moods… that enchanted calm which they say lurks at the heart of every commotion” (422).

It is here, in this “heart,” that Ishmael and the men “beheld the tumults of the outer concentric circles, and saw successive pods of whales, eight or ten in each, swiftly going round and round, like multiplied spans of horses in a ring.” Journeying for a closer look, the man-filled boat enters into the circular systems created by the movements of “the women and children” (the cows and calves).

From the vantage point of the sailor peering over the edge of the boat, the narrator describes a marvelous vision below:

“far beneath this wondrous world upon the surface, another and still stranger world met our eyes as we gazed over the side. For, suspended in those watery vaults, floated the forms of the nursing mothers of the whales, and those that by their enormous girth seems shortly to become mothers…..and as human infants while suckling will calmly and fixedly gaze away from the breast, as if leading two different lives at the same time…. even so did the young of these whales seem looking up towards us” (423).

It is a poignant, beautiful, and deeply symbolic scene. The narrative pauses—taking a moment away from the intricate tales of men, technicalities of whaling, and vast political allegories—to stare into the depths. In this moment, our narrator’s vision becomes everyone’s (“our eyes as we gazed over the side”), and we (the reader included) finally see whales not as prey, commodities, or monsters but as living, loving, nursing beings. It is a moment of serenity and humanity, but the humanness is located with the whales, not the men. Female whales, mothers nursing.

I teach Moby Dick regularly, but the first time I did, I was a young assistant professor in my second year at Yale. My first job. My first time teaching The Great American Novel. And… to add to the pressure of both, I had a newborn baby.

I remember reading and preparing to teach while nursing and pumping, feeling myself a little like a cow or whale.

I had read Moby-Dick before, so I knew that the beautiful brick-sized book is arranged in short chapters. But it took reading while breastfeeding to divulge that these chapters are actually the perfect length for that combination of intimate activities. That’s right: one chapter, one breast. Then, dog-ear the page (one-handedly of course), shift position, and start again.

I had just one year under my belt as a tenure-track professor when my daughter was born. This was not enough time to gain my academic sea-legs.  So, I was struggling to keep the line taut as I taught my classes in a state of severe exhaustion mixed with hormonal instability.

Worse, I was trying to pretend that my two identities—the one located on-campus and the one whose swollen breasts burst just beyond Yale’s gothic walls—did not inform each other. And, you know, I was actually doing a pretty good job.

But then it happened.

I was pumping more than nursing. I was stressed. I was doing the best I could, but obviously — it seemed then — it wasn’t good enough. Because, three months into motherhood, I was reading and teaching about Melville’s novel, and I found that, unlike those whales floating on their sides as their calves suckled, I could not nurse my own child. I had lost my milk.

It felt like something had broken in me — literally and figuratively.

Melville describes the scene of breastfeeding as the ultimate, sacred pause. Time stops and movement slows as Ishmael and the men enter the space where female whales nurse their calves: “suspended in those watery vaults,” the whales inhabit a sacred space that is also a static tomb. This serenity is but a pause in the attack; the sleek is the ultimate hunting ground.

Melville might not write much about women. But he nails what it feels like to nurse a newborn, especially when the world around you threatens the momentary calm. Women are not whales (though we may feel like it, especially while pregnant and nursing), but we often describe nursing a child in language of poignant duality similar to Melville’s text: it is a beautiful, serene, and significant time for mother and child. But it is also a time of deep apprehension and terror.

A mother nursing her baby is the ultimate scene of suspension. Not exactly “suspended in those watery vaults” but suspending one’s life in order to feed another; suspending fears of the unknown and, worse, the known–of predators and problems that stalk the innocent and vulnerable. Nursing also requires a suspension of time, and for many professional women, that suspension is often too much to bear.

I look back at that time in my own life—as a new mother and new professor — and I recall the simultaneous pain and poetry of the moment when, while reading Moby Dick, my milk dried up.

That particular reading experience, so deeply embodied and personal, has forever shaped my understanding of Melville’s novel and my appreciation of literature more generally.

What I take from Moby Dick is a recognition that at the center of great tales of men, monomania, and maelstroms, mothers nurse their babies.

When my daughter was new, I tried to keep what she was teaching me separate from the literature I was teaching my students. What I know now is that the experiences of care that lurk in the background can be the ones that matter most and deserve, indeed demand, to be taught.

Writing, and especially sharing, this piece terrifies me. My generation of female academics, and certainly those who came before me, learned to keep the spheres of life and work (mother and professor) separate. I think (and hope) that things have changed somewhat. But writing and sharing this piece takes on newfound significance in our contemporary moment, when monomaniacal leaders steer the ship directly into the maelstrom without pausing to learn anything from nursing mothers.

Returning to the classroom this fall, in the midst of great cultural upheaval and months of unrelenting seasickness, I am reminded of the lessons learned from reading Moby Dick while breastfeeding. Great literature and the teaching of it require us to retrieve from the background and bring to the fore the acts of caretaking that connect us to other living things, human and sea creature alike.

Kinds of Blue: Notes on the Avonlea Village Improvement Society and Teen Girlhood