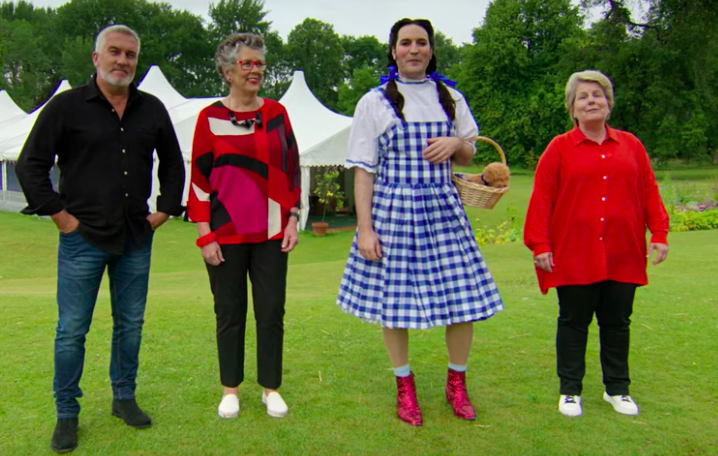 (Warning: Spoiler’s for Noel Fielding’s Outfits on Season Ten of The Great British Bake Off)

This season of GBBO reached Henry James-level subtlety in its explorations of cake, social polish, and gender pressure. Lacking a fully developed theory of the season, Avidly here presents some preliminary work towards the New Noel Fielding Criticism, wherein we consider how Noel’s boots, jeans, and sweaters offer forth a new mode of masculinity to respond to the toxic miasma that is much of 2019, up to and including Paul Hollywood.

Noel’s Season 10 look, which might be described as  “nurturing Mick Jagger” or “Russell Brand, but not a egomanical guru dick,” leaned in to his lanky and fopish gender-queer Britishness as an alternative model of protective dudeness. Regardless of what you think of this absurd-friendly aesthetic, facts are facts: Noel is very tall, his eyes are very kind, and if you were struggling to finish the leek lattice on your Tart Tartin while Paul Hollywood leered at you suspiciously, you tell me if you wouldn’t be complexly soothed by Noel’s leaning presence.

Here’s we’re bracketing Noel’s season-opening Dorothy costume (!, pictured above) to go directly to Noel’s oversized tiger-maw sweater. Is he threatening to eat Paul or promising to protect you? Yes. 13/10, get your hands out of your pockets, Paul.

Biscuit week is the  most British Baking and thus most stressful week. Noel comes in with an excellently bizarre woodland goth creature sweater that can only be read as a show of solidarity with Helena. Note also spattering on the boots. 12/10, good crumb.

Bread week, Paul at his worst (best?). Noel opens the episode with a faux-phone call explaining his presence: “I like to think I bring something unique to the show: I tell jokes, I wear fashion shirts!” It’s true but this is not his best. 11/10, not fully proved.

Here is Noel beginning Dairy Week, wearing a shirt I would have worn in 1983 with leggings and a side pony tail ie the best kind of shirt, while generating a “playlist” of “baking puns.” Here are some: Scone Jovi. Bun Direction. Siouxsie Choux. Flan Duran. Total Eclipse of the Tart. 14/10 Noel you are too good for this world.

Pink kittens. “What gender even is this/it’s everything,” explains Jordan Stein, and that may be the definitive take on Noel’s line in this opening, “I’ve got to do some more filming with Paul.”  What would you wear while shepherding anxious bakers through their “ornate custard” creations? 13/10, Noel never stop.

It’s a joke because you’re like: “he’s Jesus” but then he doesn’t think he’s Jesus, he thinks he’s Lawrence of Arabia. Unmistakably riffing on Russell Brand’s “messiah complex tour,” Noel here makes a quick pivot to show off, for the first time this season, his Seussian-print sweater and new green jeans. 14/10, “I guess it must be the flag of my disposition, out of hopeful green stuff woven.”

“Yes, festival week! This is where I really come into my own!” Noel casts off his shaggy red coat to reveal a slickster star-printed pullover jacket which, we know now from the vantage of episode 10, foreshadows his conclusory celestial boots. 13/10 what was that red print shirt though I think that was better.

Maybe the best thing anyone has ever worn, in fascinating dialogue with Tiger sweater from week 1. “What Slash is probably wearing in 2019 while watching shows like this,” says Jordan Stein. We can only conclude that he removed the sweater after the opening bit out of sheer concern for our overtaxed interpretive powers. 15/10, definitely a charmer.

Are they skulls? Darth Vadar helmets? Ravens? Noel’s hair looking especially coifed this weekend; also he shaved. Clearly looking his best to mourn the departure of Henry, what even. 14/10 these jeans definitely a balm during the last stressful episodes.

NEW BOOTS and a helmet. 15/10, shoot right out of this shit, and towards the stars.