“Have Fun in the Sun!” The (Im)personal Archive of High School Yearbooks

When my parents recently decided to move to their cabin upon retirement, my mother had me spend a holiday visit home sorting through the boxes of trinkets and documents from my childhood bedroom: a small bank filled with coins worth exactly their own value; a copy of my SAT score report; reams of paper, loose and in binders, from elementary, high school, and college. The archive of my adolescence.

But it was my old school yearbooks that most interested me. In some, I’m pictured only once or twice. In another, I am featured on a full-page spread. Some years are packed with signatures, personal and generic, and with markings drawn on and around the faces of what must have been friends and enemies. In my senior year, there is not a single signature or mark. But in each case they are oddly intimate. They represent a record of my life in a way that feels deeply personal, even if I didn’t have a hand in composing it. Even if I didn’t seem to care about it at the time.

I’ve studied these books in dusty archives, learning about the lives of (mostly long-dead) strangers from across the country. I’ve also amassed a considerable collection of other people’s high school memories from yard sales and eBay. But I hadn’t paid much attention to the way my own yearbooks are the intersection between what I study and what I have lived. They are the connection between my past and the past. And as thousands of high schoolers circulate their own yearbooks today, this historical genre connects us all to the present and future as well.

Never totally idiosyncratic nor entirely formulaic, neither fully accurate nor altogether romanticized, yearbooks provide a unique view into the present and the past. They exist at the intersection of the individual and group, of local experience and national or even global history. In each of these ways, they are meaningful cultural objects that give us insight into far more than fashion trends and bad hairfads. Even when we disavow that they represent high school as we remembered it or how we experienced it, we somehow understand that yearbooks are significant to us…or they might be to someone (else), someday.

This is because, as a consistent and recognizable genre, yearbooks engage in cultural production. According to rhetorical theorists, genres like the yearbooks are not just types of texts; they also represent and participate in patterns of practice. That is, yearbooks aren’t just something we have, they are something we do. As a result of repeated situations and actions, they become recognizable forms, or genres, shaping situations and actions in turn. Thus, they continue to both reflect and shape student culture and experience, both today and in the past.

And students did several things that led to the modern yearbook around the turn of the last century, when school yearbooks first developed in American high schools.

First, they wanted to remember things. They kept scrapbooks of important memorabilia in order to help them remember. In the early twentieth century, as more and more Americans began attending high school, publishing companies began capitalizing on this practice by publishing scrapbooks and memory books specially designed to remember the high school days. These books featured blank pages with decorative titles directing the student as to what to preserve and remember: photos of friends, favorite classes, “jokes and frolics.” Providing these categories both reflected and helped determine what students valued about their high school experience.
Second, students formed discursive communities. The early twentieth century was a time of massive change to the American high school, which saw exponential growth in the student population that strained the sense of community that had previously been borne of a shared cultural and economic background among students. More and increasingly diverse students were now identifying as high schoolers, and deciding what that meant for them as individuals and as a group. The publication of their own literary journals was a way in which they worked that out.

With changes to print technologies that made local production more affordable, students started publishing school literary journals on a monthly or quarterly basis. The journals featured student writing, local interest pieces, and jokes from around the school, and reported on exchanges of journals with other high schools. Once a year, many schools began to put out a special “annual” issue, commemorating the school year and the graduating class. These special issues often featured photos of the graduates and special information about them and the school. Eventually, these annual issues included the activities of other classes in the school beyond the seniors, too. Gradually, other standard features emerged, like the inclusion of a “class prophecy” or an account of other school-wide activities. These features were increasingly standardized as schools continued to exchange issues with one another and, eventually, yearbook committees became an extracurricular activity overseen by national boards and guidelines. In this way, the modern yearbook was born.

Finally, though, students asserted their individuality and prized their 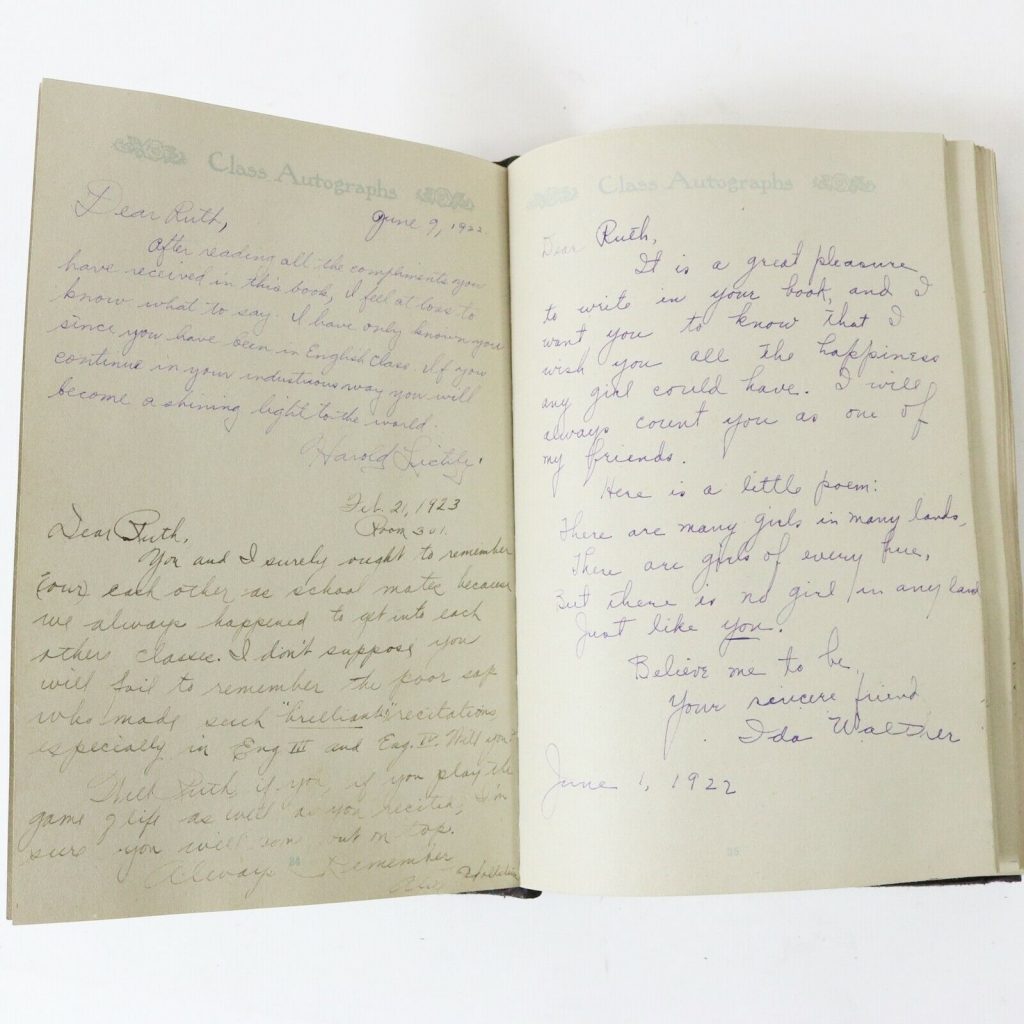 personal friendships. And it is the signatures they captured and wrote as record of that distinctive experience—first in autograph albums and eventually in school memory books and yearbooks—that really makes the modern yearbook what it is today. Whether it is just a scrawled name or it is a pithy phrase about friendship or the future, the signatures are the personal stamp on a published text, intervening in its unified projection of memory to remind us of the individuals that comprise it. Often formulaic, highly recognizable, and sometimes recycled again and again over generations, they are a genre in their own right, both reflecting and shaping what students do in the face of the repeated social situation of high school attendance and graduation.

This has been the case for more than one hundred years now, as the desire to remember, connect, and self-define continues to resonate with American youth. Each book is unique, made absolutely one-of-a-kind by the signatures therein, while also almost staggeringly the same as the others for more than a century. In this way, yearbooks articulate the personal and impersonal in writing and in experience, memory, and culture writ large. They are the living archive of the history of the American high school, as much as of the American high schooler.

As I was writing an article on the history of WWII-era yearbooks from California the other day, my mother pulled out a copy of my grandfather’s yearbook from an old hutch and handed it to me. It was from northern Minnesota during the same era I was researching. I flipped through, looking for his name and his photo among the pages. Turning the final page without finding any trace of him, I started at the beginning again, scouring the volume for any mention. There was none. He appeared to have gone off to the war that year, eluding capture by the yearbook photographers.

And yet, the signatures scrawled across the inside covers told me he was there. Well-wishes for his deployment and memories of his good humor, they showed me he had been part of shaping that community of students, that local culture. The very existence of this book, still tucked away in my mother’s hutch some eighty years later, told me he was there, too. That this book was worth keeping because of it. That it meant something to him, represented and participated in something about his life. 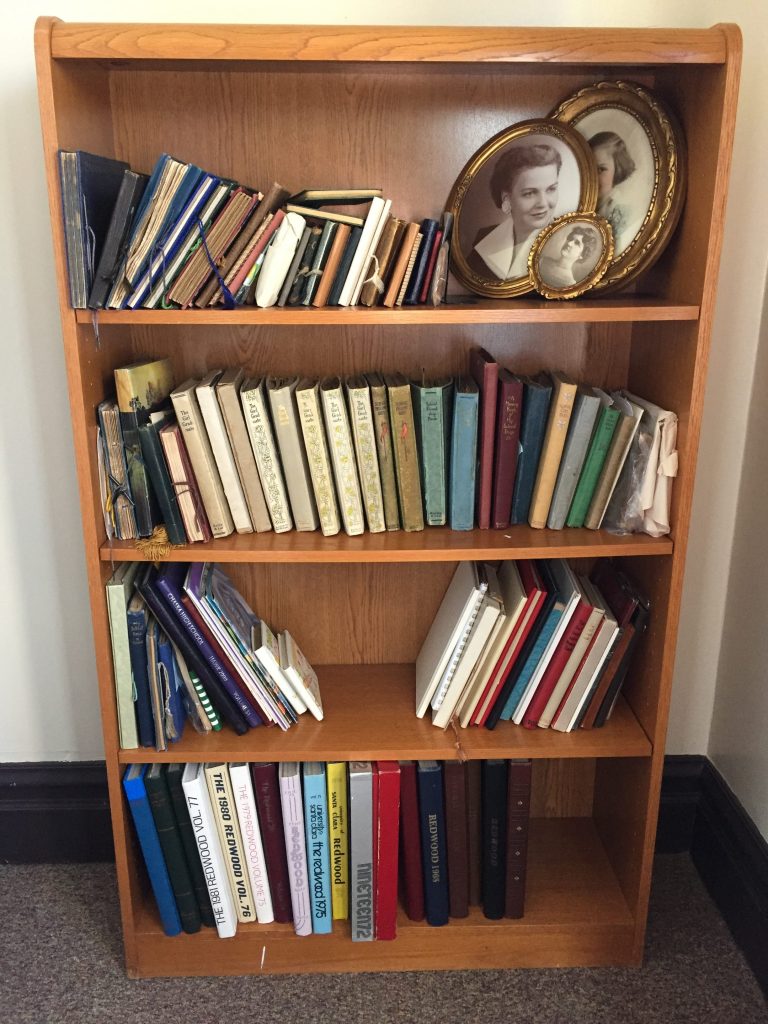 Now my grandfather’s book is part of the collection that lines my office shelves, forever shaping the story I see when I write about yearbooks or about the history of American schools. And my own yearbooks are there on the shelf, too, bridging the gap between generations, between self and other, between the personal and the professional for me. They—along with the hundreds of books kept by strangers I will never know—are the archives of my work and life.

—Amy Lueck is Assistant Professor of English at Santa Clara University, where she teaches writing and rhetoric. She researches histories of rhetorical education and practice, particularly in US high schools and colleges. Her book, A Shared History: Writing in the High School, College, and University, 1856-1886, is forthcoming from Southern Illinois University Press next fall.

All images from author’s personal collection.