Scooby Doo In the Museum

The very first episode of Scooby Doo, Where Are You?, which aired in 1969, is set in an impossible museum. Scooby and the mystery-solving gang of Daphne, Fred, Shaggy, and Velma try to crack the case of the Black Knight, an empty suit of armor they discover sitting in the driver’s seat of an abandoned truck. Daphne finds a label with the instructions, “Deliver to the County Museum”.  The small, temple-like building they visit to return the armor and later to investigate unfolds into an unrealistic funhouse in which the galleries of antiquities, historical “relics”—like airplanes and tanks—and paintings and sculptures expand into seemingly endless rooms. The Black Knight has come to life and only a careful hunt for clues can explain what is really happening. Twenty-two minutes later, viewers learn this has been the site of a kidnapping, a carefully constructed myth, and a major art fraud executed by the museum’s own curator, Mr. Wickles—all unmasked by four meddling kids and their dog.

“What a Night for a Knight” is both zany and a pretty standard plot for the various iterations of Scooby Doo cartoons that aired from 1969 through the 1970s.  There is an unusual mystery—often involving an important or valuable object—that seems to have supernatural origins. Careful research invariably reveals a human villain.  The plots may feel formulaic, but the radical potential of the museum and the possibilities of close looking and object-based study they suggest aren’t particularly cartoonish. In the various Saturday morning Scooby Doo episodes of this period, museums—and cultural sites like historic buildings, archives and archaeological excavations—appear again and again as powerful places for the gang to explore because they contain real things that have the ability to unlock stories and reveal surprising connections, if only someone understands how to look at them.  These objects divulge something about the value of the material past to the present—and the rising importance of museums and material culture to the transforming social world that created Scooby Doo.

I have been watching Scooby Doo—mainly Scooby Doo Where Are You (1969-1970) and The Scooby Doo Show (repeated throughout the 1970s) with my four-year-old son for the past year. We read books about Scooby, we debate episodes, play with the toys, and construct the Legos—and he builds a lot of monster traps around the house.  I am also a museum curator and American studies scholar who writes and teaches on material culture, objects, and museums. Early Scooby Doo can be a mind-bending show for me. Not only does it occasionally pass the Bechdel Test, episodes take place in iconic sites like Sleepy Hollow and the Salem Witch Museum.  Its chase scenes are wild and delightful, until disturbing racist stereotypes pierce through the campy sophistication. It is a layered, complex, and often baffling cultural text—and my son loves it.

Lately I have been wondering if Scooby came into my family’s life with such force because of all the time we spend together in museums and galleries, talking about installations, old, precious things and what they mean. We had to develop “museum feet”—a theatrical, deliberate tiptoeing—as soon as he could walk on his own.  He sees the Pterodactyl Ghost in the feet of carved neoclassical furniture and looks carefully for clues while I talk with colleagues. Not every storyline centers on historical objects and their keepers, but museums, curators, and professors are at the heart of many Scooby Doo episodes.  I am sure this isn’t lost on him.

When I watch the show, I see the possibilities of object-based research everywhere. At first, the focus on clues just seemed like typical detective fare. There were small moments that tipped me off that something else was going on. How did Velma learn to distinguish between Chinese and Tibetan objects? Does the plot really turn on her ability to read Native American pictograms or to identify a forged painting or ancient coin? Why are we in the basement of the Smithsonian, the home of a Civil War memorabilia collector, or a creepy wax museum? Apart from Velma’s impressive connoisseurial abilities, the whole gang frequently displays an unexpected ethical focus on cultural patrimony, keeping things in the places where the come from, like archaeological sites in Turkey or Mexico or museums in Puerto Rico and Venice where they may be properly understood. Could they be thinking about the important 1970 UNESCO convention on looted cultural property? They seem to care about special historic objects and frequent places that are full of them. Unlike the gang, the curators and professors they encounter—the supposed experts—use their knowledge for personal gain and crime as often as they do to care for collections.

The investigations the gang conducts usually invert the expected power relationships on the show. The kids with material evidence know more than the adults who simply accept what they have been told. While this radical aspect of Scooby Doo feels closely connected to the social transformations of its period, it also links to the rising cultural importance of museums and the scholarly consideration of material evidence in the 1970s. Record breaking attendance at historical sites like Colonial Williamsburg during the years around the Bicentennial and at the various venues of The Treasures of Tutankhamun positioned museums as important places of both knowledge and narrative. The things there mattered and made bigger stories possible, yet the focus on specific things also required the inclusion of new stories and previously ignored historical actors into those narratives. No, Scooby and the gang were not practicing New Social History, but they were focusing attention onto material evidence and unexpected connections that challenged the status quo.

There are potential costs to these investigations. Though the gang seems to know, at some level at least, that the monster is always a man or a woman in a mask, the monsters are still terrifying. There is a level of fear and danger, which are mitigated somewhat through careful research and a plan for a deliberate unmasking.

This may seem confusing to those who know Scooby best through the 2002 and 2004 live action movies or the excellent 2017 novel Meddling Kids, which contain some paranormal activity. Early on, all it took was tangible proof to bring a villain to justice.  The monsters were just people and the truth affected them. Things have since become harder and less certain, at least in the world of Scooby Doo. 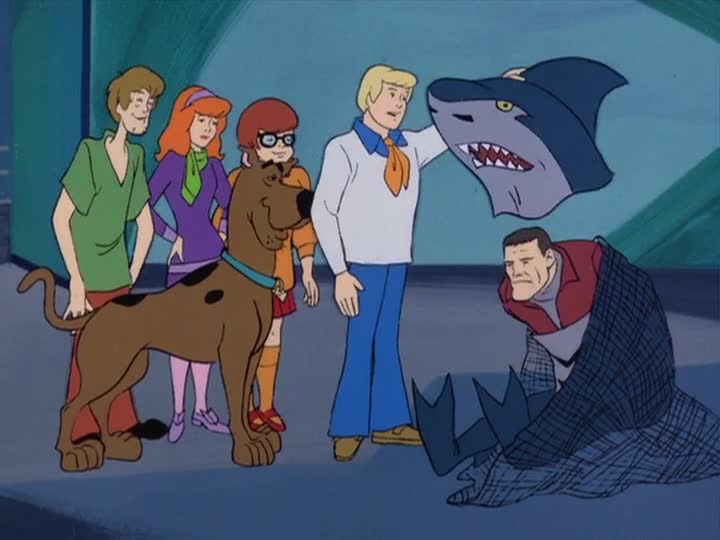 The centrality of unmasking to the story came home to me when my son was Scooby Doo for Halloween this past fall. He tried to unmask other costumed children—it became pretty awkward. But, I loved the earnestness and confidence of his imaginative play. It wasn’t too far from how I think about research as a curator and a teacher: both sincerity of purpose and a willingness to play with ideas are necessary for successful projects. When I go into museum or archival collections with my students and encourage them to investigate things that we don’t know much about—to consider objects that may reveal stories about histories of race, gender, mental illness, or protest—I want them to realize they are engaged in their own high stakes unmaskings—about the limitations of traditional disciplines and sources and the false separation of academic work from meaningful cultural and social questions. There is nothing I want more than a seminar of meddling kids who can show me what I have missed and can expose my own false assumptions.

My son may love Scooby Doo because his mother is a scholar who works with objects, but perhaps I return to it, in spite of myself, because it reminds me of what those objects make possible.  The study and presentation of material things should be exciting and purpose driven—never rote—and when you get lucky, you may be able to look closely and unmask your own small monsters.

Sarah Anne Carter is Curator at the Chipstone Foundation where she enjoys time travel.  She also writes about museums.