I had no plans to watch the gymnastics competition in Rio, but when you keep hearing, she’s the best gymnast in history, you tune in.  I am referring, of course, to Simone Biles, the 19-year old virtuoso from Texas, winner of the all-around gold medal and innovator of the most difficult tumbling pass performed by a woman: a double backflip with a half twist.  What makes the pass so hard is the final half twist, which causes Biles to land blindly where a full twist would enable her to see the mat on her way down.  It’s a magnificent thing, perhaps the most spectacular example of Biles’s explosive speed and strength and nerve.  It’s not my favorite of her skills—my favorite is that strange squatting spin she does on the beam—but when I watch it, I cannot help but think: I am seeing something that was impossible until one day it wasn’t.

In watching the coverage of Rio, I have learned that the sport’s commentators now refer to gymnasts as “workers.”  Maddie Kocian, for example, was chosen for the Olympic team because she is thought to be one of the world’s best “bars worker.”  A bars specialist, this was the only event on which she competed in Rio.  When the commentators use this phrase, they use it to mean that the gymnast manipulates the apparatus.  She works it as a potter works clay.  She works on it; she is a worker of it.

This language of “worker” was not the parlance of the early 1990s, when I came of age in the sport, but it rings true to me now on a valence of meaning perhaps unintended by Tim Daggett and Nastia Luikin.  In it I hear the labor of “worker,” the double signification that she also works for the apparatus.  This work—which in the case of gymnastics is the work of children—takes shape on the body, conforming it to the claims of the sport.  But having been a child of gymnastics, I know, too, that these labors live vibrantly in the mind, calling to it with promises of a most orderly, a most trustworthy universe. 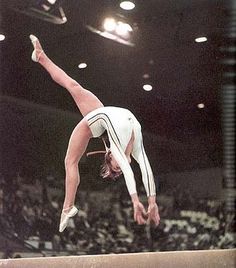 I grew up in the era of Shannon Miller and Dominique Dawes, an era when the United States surpassed Russia as the dominant force in the sport.  This was an era when it was easy to be obsessed with gymnastics, and obsessed I was.  On Friday evenings, I would beg my parents to let me pull out the living room Hide-a-bed and watch my VHS tapes of the Romanian greats.  I bought these tapes from a neighbor’s garage sale with some nickels I’d scraped together, and they were my most cherished possession.  I watched them dozens, maybe hundreds, of times.  Their images are etched into my memory: the white and blue-yellow-red striped leotard that Nadia Comaneci wore at the 1976 Montreal Games, the thick red yarn wrapped around her ponytail, her lines, her rivulet-like lines, the arches of her feet like a ballerina’s, the palm-first wave she gave to adoring crowds, who by luck or genius were there to watch her first perfect 10.  I remember the spliced-in scenes of poverty on the streets of Romania and the voiceover explaining how the country’s destitution made the Romanians’ victories all the more remarkable.  And the steely Bela Karolyi, whom I remember watching bark at the girls one minute and wrap them in enormous hugs the next.

My Friday night viewings were both work and pleasure.  At my behest, my parents reluctantly enrolled me at West Side Gymnastics when I was six.  By eight, I had “made the team”—the technical term the girls at my gym used to describe one’s ascension from a recreational gymnast to a competitive one—and I was training several hours a day, five days a week.  My coach was the gray-haired Gabe, a man equal parts gruffness and kindness whose parallel life as a teacher in the city’s highest-poverty neighborhood I was only to learn of much later.  Gabe coached girls ages 8-11, preparing us to be selected onto the team of what we younger ones called the “older girls,” ages 12-18, who represented the gym at state-wide competitions in Rochester, Binghamton, Syracuse, the great post-industrial trifecta of upstate New York.  Then work began in earnest.

The work of gymnastics is the work of repetition, and it is the work of counting.  Workouts proceed by way of sets, with each set containing a certain number of individual movements.  As a group, we younger girls would move systematically through lists of exercises: ten sets of ten; five sets of fifteen; three sets of a hundred.  We would take turns on each apparatus, quietly analyzing technique and sending up peels of delight at artful executions and careful condolences at falls and slips.  Where there was an asterisk on the list of sets, this meant that the set contained a new or risky skill and required spotting.  If we were practicing dismounts from the bars—a truly frightening skill to learn because letting go of the high bar too late could mean catching your toes on it midway through your flip, sending you face-first into the mat—for instance, we’d flush Gabe out from some corner of the gym and he’d come station himself beneath the high bar, hands outstretched in the posture of a person signaling for pass, poised to catch a careening eight year old.

If repetition is the tactic, modularity is the strategy.  The goal with gymnastics is to turn what was impossible for your body to do one day into a knowledge so deep it lives in the memory of your muscles the next, and to do so, you build skills on top of other skills.  In this, it is not unlike assembling a modular sofa or tasking your students with a modular writing assignment: break the thing down into component parts and focus on one part at a time, starting with the known, assimilating the new.  In gymnastics as in writing, the genius of this strategy is that you arrive at an unprecedented assemblage without truly having felt the stretch and fear of unfamiliarity.  To use a different metaphor: you evolve by increment, not mutation.

I have spent much time wondering if children who travel far down the road of competitive gymnastics are a self-selecting bunch, inclined toward the systematicity and orderliness endemic to the sport.  Do children who gravitate toward it do so because they’ve found something profoundly satisfying in the act of repetition, or does it, rather, create children who come to need such orderly patterns?  When I put myself under the pop-psychology microscope, I find anecdotal evidence to support both theories.  I am told, for example, that for the first three years of my life I refused to wear anything but a green shift dress.  I was so attached to it that apparently my mother had to resort to deception to get it off of me and into the wash.  Is this the luminous detail, sign and symbol of an early obsessive?  How about the fact that I watched the same movies and listened to the same songs over and over again (from ages 4 to 6, good luck trying to get me to watch something other than Annie or listen to anything other than the Beach Boys), or that every time I climbed the steps in our house I counted them?  The recurring dreams, the lucid dreams, the serial nightmares, the childhood insomnia?  Was it my brain that walked the rest of me into West Side Gymnastics, whose processes I intuited would satisfy my deepest urge to repeat, replay, rerun, perfect?

It seems a futile exercise to try to parse cause from consequence, but it is true that my brain still works like the piston of a car engine, firing down fragments of thought and noise, and I can’t help but draw a long, if meandering, line from my childhood habits to my adult habits of mind.  The psychological fallout most commonly associated with gymnastics is disordered eating, which would seem to stem from the effort by gymnasts and their coaches to mold their bodies into pre-pubescent bundles of pure muscle.  To the extent that eating disorders have to do with control, they are, too, highly compatible with the deepest logic of gymnastics: to exact control over the human form in the very moments when control is least likely, in moments of flight and balance.  In my experience, the legacy has been different, as my childhood labors live on not in restriction but in surplus, in the form of the thought that can’t be let go of, in the involuntary counting of steps and beats and minutes, in the laser focus—patterns that bring many benefits at the same time that they often make me intractable, indissuadable, and muddled.

My affair with gymnastics was not to cross the threshold of adolescence.  It quickly became clear that crippling stage-fright would always outpace talent and ambition.  World-class gymnasts often talk about the thrill they feel at high-pressure situations, as when, for example, the team’s Olympic victory comes down to sticking a vault on a busted ankle.  They don’t cope with pressure, they feed off it.  They talk, too, about how in the moments leading up to a performance, their thoughts steady to silence and their bodies take over.  I find these statements absolutely remarkable, and while I understand them intellectually, they are so far from my experience that they stretch the limits of true understanding.  I performed like a deer in headlights, consumed by panic.  This was slightly less true on the uneven bars—if I was a worker of anything, I was a worker of the bars—whose whips and inversions allow some measure of forgetting the eroding warehouse full of people watching you.  But it was true enough to make me unfit for the sport, or the sport unfit for me.

I was to find a better fit—becoming, as it were, a worker of books—and the rivulets of imagination would come to replace my tightly-gripped routines.  If you’ve read Henry James’s What Maisie Knew, you know that children know, and when I was done with gymnastics, at 12, I knew I was done.  I was nursing a fractured vertebrae, the result of a wonky twist, which was itself the result of limping down the vault runway at half-speed on a sprained ankle.  It was my gut, not my brain, that knew I was done, and I remember the decision to quit being quite easy and, in ironic contrast to my broken body, painless.  But if you’ve read what is perhaps my favorite story from the nineteenth century, Mary Wilkins Freeman’s “A New-England Nun,” then you also know that rituals hold outsized meaning, that attachment to them feels like love, and that this love dies hard.  Each day, the story’s protagonist, Louisa Ellis, sets herself a silent tea, “as if she had been a veritable guest to her own self,” and though the world believes that she lives a life of abject loneliness, readers realize that she is being kept company by an orderliness that is not without pomp, and it fulfills her, it is enough, and she is happy.  The loss of this—a seemingly predictable, if self-created, world—even a child knows is felt long afterwards.

—Lynne Feeley: Can make it if we run.