Bodies and MindsBooks You Should Read

The Top 10 Fag Hags of Henry James: A Definitive Ranking

Henry James numbers among the nineteenth-century’s leading dinner party guests and, not coincidentally, its worst playwrights.  Had he been born in the late twentieth century, he would undoubtedly be the most popular recurring gay on The Barefoot Contessa’s cooking show, but instead he had the great misfortune to be born in the dark days of our country when the Meatgrinder was a guy who ground meat and not a corny name for a gay bar.  Like many nineteenth-century homosexuals, James spent his days in the company of fabulous women with large hats and loose corsets. That is to say, James wrote novels about fag hags.

James’s novels, indeed, are the best novels about fag hags ever written.  In story after story, James’s well-heeled leading ladies lavish their catty observations and new world charm on the handsome men they, rather astonishingly, at first mistake for straight.  With so many brilliant examples to choose from, gay men and the women who love them have spent many long nights arguing which of James’s fag hags is a Mary and which a Rhoda.  But no more: Avidly proudly presents a definitive guide to James’s fag hags, ranked.

10. Fleda Vetch in The Spoils of Poynton

Spoils, one of the most amazingly deranged James stories, is about an old lady who tries to get poor Fleda to seduce the old lady’s son, Owen, who, despite being gay and wealthy, has zero taste.  Fleda, however, has spent too much time with old ladies and not enough with the gays. She accordingly falls hopelessly in love with the tasteless homo. In one scene, Owen hands her a tea cup and she has an orgasm, which, on the one hand, you go, girl!, but on the other hand, it wasn’t even one of the nice teacups.  Honey, if a guy with the nineteenth-century equivalent of Ed Hardy sweatpants is what makes you come, you might as well hang out with straights.

9. Maisie in What Maisie Knew

Like Fleda Vetch, Maisie falls in love with her gay, Sir Claude, and this is awkward because he is her step-parent and she is 12.  Though Woody Allen-esque in theme, the plot of Maisie is ultimately more like Eat, Pray, Love as long as you replace each of the three steps with child neglect. The story is most wrenching at its psychological level because, with all these absent parents, Maisie can’t tell whose affection she wants to substitute for whose — a detail which raises the interesting possibility that the novel’s real greatest fag hag is Maisie’s absent mother, the one who gets involved with the gay guy in the first place.  Reassuringly, however, this story ends as all stories of gay man-young girl love do, with Sir Claude teaching Maisie to smoke Pall Malls.

8. Verena Tarrant in The Bostonians

This one is complicated because The Bostonians is one of the openly gayest James novels, but there’s no gay man in it.  Our heroine, Verena, spends the novel trying to choose between her male suitor, Basil, who is way too basic to be gay, and his cousin, Olive, who is the biggest, baddest lesbo in all of nineteenth-century fiction. The novel uses its geographical setting as a metaphor to make clear that this choice is equivalent to the choice between driving from Boston to Ptown or taking the ferry, yet Verena spends 300 pages saying “But it’s not the fast ferry,” and the reader experiences both pity and disbelief toward a character who is actually contemplating the equivalent of sitting in a car for three and a half hours to go 100 miles. James’s great literary rival George Eliot inaugurated the tradition (subsequently followed by nearly all readers of The Bostonians) of shouting “Just let her go down on you already!” and throwing the book across the room.  For this reason, when James’s novels were reissued in the famed New York edition at the end of his life, he left The Bostonians out.

7. Milly Theale in The Wings of the Dove

Young and frail, Milly has gone to Venice to die, but not before she steals the heart of a man so gay he is named Merton Densher.  (No straight man has ever been named Merton Densher.)  Milly is very sick, though it’s not clear with what, and Densher identifies right away with just not feeling like doing much.  They Platonically Netflix-and-chill for hundreds of pages, and then when Milly finally dies, Densher feels very sad that he promised his other, more fun but more morally objectionable fag hag that they could split Milly’s money.  Though The Wings of the Dove reads like a cautionary tale for how not to be involved with a gay guy, its enduring appeal is that it also reminds you of sophomore year at Wesleyan.

Carl Jung had identified the meddlesome spinster aunt with romantic leaning as one of the four primal fag-hag archetypes, but biographers speculate that after Jung “forgot” his wallet one too many times and James had to buy yet another round of drinks, he created Aunt Lavinia as a revenge. In Washington Square she meddlingly consorts with her niece’s gay boyfriend, Morris Townsend, but instead of going to Vegas (or the nineteenth-century equivalent, Niagra) they end up meeting conspiratorily at an oyster restaurant on Seventh Avenue. This is a poor use of Morris’s limited gay conspiracy time, and even he thinks so.  The moral universe of James’s novels is often complex, but more than a century later, the gay guy is just always going to know which restaurant in Chelsea is the one you should go to.

Though she also appears in The Princess Casamassima (undoubtedly the cause of speculations that the latter novel was ghostwritten by a young Stephen King), it is in Roderick Hudson that Christina Light achieves peak fag hag.  Roderick is the story of a rich, gay, older dude who takes a much younger, hotter, messier twink to Rome so that the twink can pursue his art career.  (Spoiler alert: it doesn’t work out this time, either.)  There, they meet Christina, who is called by other characters “the most beautiful girl in Europe” or “in the world” at least five times.  The problem here is that Christina is feasting on the low-hanging fruit.  It was actually Henry James, in a different work, who coined the phrase “Shut up, fives, a ten is speaking,” and he used it to talk about his narrator.  So if the characters think you’re beautiful and the narrator is silent, well, honey, you should probably find yourself some better friends.

4. Maggie Verver in The Golden Bowl

Both an American and a Princess, Maggie is a consummate fag hag.  But in a departure from James’s usual pattern, she is not married to a gay man.  Instead, she is the daughter of one.  Her father’s faggotry comes as a surprise to no one other than the woman whom this previously windowed man marries, but to make matters infinitely fucked up, Step-Mom deals with her husband’s surprise homosexuality by carrying on an affair with Maggie’s husband.  (And you thought the gays brought the drama.)  Maggie ends the story by having a friend break-up with her dad, though following the classic Jamesian theme of renunciation, the blow is softened when Maggie realizes that to be a good fag hag, one sometimes must give up being a fag hag at all.  Renowned for its psychological subtlety and exquisite emotional drama, The Golden Bowl nonetheless has a minor character named Fanny Assingham.  I am not making that up.

3. Isabel Archer in The Portrait of a Lady

Isabel is a plucky American who inherits a large European fortune and then marries the wrong man.  He’s actually doubly the wrong man because he’s both gay and evil.  The right man is named Goodwood, which is totally a penis joke, as is the name of her best ladyfriend, a Miss Stackpole.  The other right man is her cousin Ralph, but in addition to being a relative and also gay, his last name is Touchett, which sounds like “touch it,” which is totally a penis joke because he spends the whole novel with his hands in his pockets.  Isabel proves to be, in the rather earthy nineteenth-century expression, the hen of the cock house.  She is an amazing fag hag, yet the tragedy of her story is that in this respect, as in all others, only too late does she realize her own capabilities. 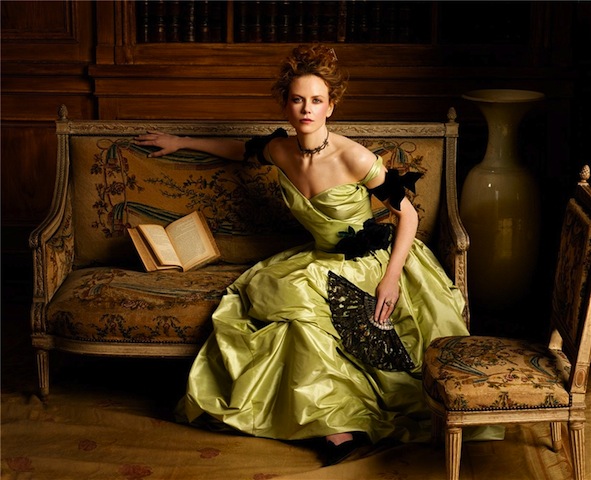 2. Maria Gostrey in The Ambassadors

Arguably the saddest of James’s novels, The Ambassadors is a story of a dried up old queen named Strether who goes to Paris to find his step-son and in the process loses himself.  What he gains, however, is Miss Gostrey, one of the few Jamesian fag hags to know full well she’s a fag hag and own that shit.  She is indeed so badass in her fag-hag-itude that if someone ever made this sad book into a movie, she would have to be played by Tilda Swinton dressed as David Bowie.  Maria Gostrey isn’t the fag hag who’s going to have a baby with you if you’re both 40 and still single, because she’ll be at a Robyn concert drinking from the bottle with three of your exes, ignoring your texts.  I mean, do you know what she does in the first chapter, when Strether confesses to her that he’s from a podunk town called Woollett, Massachusetts?  “You say that,” she returned, “as if you wanted one immediately to know the worst.”  Hag 1, Fag 0.

1. May Bartram in “The Beast in the Jungle”

“Beast” is one of James’s more well-known short works, about the Platonic friendship between a closeted homosexual and a very, very patient unmarried woman who seem can’t get anyone else to take her to the opera, despite the fact that she has a small inheritance.  The two are bonded by a secret of the man’s, which is that he’s gay, but he doesn’t seem to know this and keeps bothering her about when he will know what his secret is.  In the story’s tragic climax, he arrives at May’s deathbed to ask if the revelation of his secret has come to pass, but she cannot understand him because there is a dick in his mouth.