It’s a complete cliché for a lesbian to claim Louisa May Alcott’s Little Women as a key text in her self-understanding and relationship to the world.   After all, who was Jo but our tomboy self, our “behind the mask” self, our struggle against normative femininity?  Then, too, it’s a sign of self-misunderstanding to identify with the novel as a whole too closely, given the long history of criticism situating it as the apotheosis of disciplinary intimacy—the iron fist of patriarchy clad in the lemonade-soiled glove of familial sympathy.  “Gloves are the most important thing,” says the insufferable Meg.  In this framework, our proper orientation to the novel is made clear: loving anyone but Jo, one may as well long for a corset.

One may.  Actually, one did.  Jo wasn’t the girl for me, though I went through a brief tomboy phase in a vain effort to please a very butch 3rd-grade bully, and though my diaries from about age 8 to about age 10 are filled with Jo-like phrases such as “harum-scarum” and “niminy-piminy.”  No, my key to self-understanding was Amy.  Amy, whose valleys of humiliation were all about a failure to achieve high femininity, not because the glove didn’t fit, but because she couldn’t afford the good ones:  “‘I don’t believe any of you suffer as I do,’ cried Amy, ‘for you don’t have to go to school with impertinent girls, who plague you if you don’t know your lessons, and laugh at your dresses, and label your father if he isn’t rich, and insult you when your nose isn’t nice.’” Amy is Jo’s high femme foil, and I loved her for it.

Indeed, Amy lives just as much outside Meg and Beth’s female world of love and ritual as Jo does.  Meg and Beth are invested in proper domesticity, whereas Amy trades in commodities, outside the home. Take Amy’s account of the pickled lime episode:

Why, you see, the girls are always buying them, and unless you want to be thought mean, you must do it too. It’s nothing but limes now, for everyone is sucking them in their desks in schooltime, and trading them off for pencils, bead rings, paper dolls, or something else, at recess. If one girl likes another, she gives her a lime. If she’s mad with her, she eats one before her face, and doesn’t offer even a suck. They treat by turns, and I’ve had ever so many but haven’t returned them, and I ought for they are debts of honor, you know.

The traffic in limes secures belonging, and while thus far Amy has been spared the spectacle of an angry lime-sucker, her debts are mounting.  She knows that, as my mother intoned almost daily, money can’t buy you looks, brains, or talent. 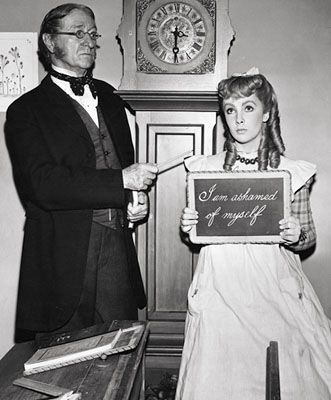 But she also knows that money, or the things it buys, is the lubricant for most forms of sociability, which was why in high school I worked 4 jobs at once to get myself to the rich kids’ parties in Vail — not because I had any desire to see Vail, but because those parties were the least supervised and therefore the most interesting.  Meg generously supplies Amy with the means to pay back her lime-debt.  But alas!  Her limes are discovered, and she is made an example of, subjected to public corporal punishment.  I think I was supposed to get out of all this that pride goeth before a fall, and that pickled limes are less important than the respect of one’s teachers, but all I could think about was how unfair it was that the teacher picked on the one girl who really knew the value of a lime.  And that negative attention is better than no attention at all.

In addition to being the novel’s high femme, Amy is the novel’s proto-Marxist, and I loved her for that too.  Her first line in the book is “I don’t think it’s fair for some girls to have plenty of pretty things, and other girls nothing at all,” and she is right: it isn’t.   It’s maldistribution, dammit, and if the March girls could give their Christmas breakfast to a hovel full of immigrant children, why can’t someone come across with a new dress for Amy?  Instead, she has to wear her cousin’s ugly clothes.  Likewise, I was forced to wear boys’ clothes, because they could be handed down to my brother (my mother approved of butchness on girls, but not of femminess on boys).

And this disparity signals an important fact that too many readers of Little Women miss: if being too tomboyish like Jo signals a refusal to acquiesce to proper middle-class female socialization, well, so does being too feminine like Amy.  My mother’s only slightly ironic assessment that certain items, like mini-skirts, patent-leather shoes, and large hair bows, were “NOCD” — “Not Our Class, Dear” — was the modern-day version of Little Women’s “money cannot buy refinement of nature… rank does not always confer nobility, and … true breeding makes itself felt in spite of external drawbacks.” In the novel’s economy, it’s a virtue to be unfashionably matronly; Marmee wears a “grey cloak and unfashionable bonnet” and these sartorial sacrifices are part of what mark her as “the most splendid mother in the world.”  Amy’s desire for beauty does not make her complicit with these norms, it is her bid for the sublime.

But interestingly, it’s Meg who accepts a borrowed dress and lets her wealthy friends dress her up and parade her around looking like an idiot:  “Now do let me please myself by dressing you up in style,” wheedles her friend Belle, “I admire to do it, and you’d be a regular little beauty with a touch here and there. I shan’t let anyone see you till you are done, and then we’ll burst upon them like Cinderella and her godmother going to the ball.”  Is there anything more insulting than being told you would be pretty if only you dressed better or did something with your hair?   Meg lets herself get curled and crimped, powdered and laced tight, and ends up looking “quite French” according to her friend Sallie, which in the novel’s economy is not a compliment.  Laurie delivers the final blow: “I don’t like fuss and feathers.”   But this episode sets Meg up as Amy’s foil, for Meg desperately wants to conform to the latest trends, whereas, the novel suggests from time to time, Amy has actual taste: “[her] artistic eyes were much afflicted, especially this winter, when her school dress was a dull purple with yellow dots and no trimming.” Though Jo gets all the glory for being a writer, it is easy to forget that Amy is an artist too.

Alcott, however, seems determined to devalue Amy’s aesthetic perspective.  The chapter detailing Amy’s progress in the visual arts is called, mockingly, “Artistic Attempts” and opens with the salvo that “it takes people a long time to learn the difference between talent and genius,” suggesting that Amy has a bit of the former but none of the latter. Part of the problem, again, is that Amy’s class aspirations cast suspicions upon her talents: the chapter accuses her of “a desire to move in ‘our best society’, without being quite sure what the best really was,” which leads her to “often mistaking the false for the true, and admiring what was not admirable.” Her “artistic fête” for the rich friends who profess admiration for the rustic scenes she draws is a disaster; only one girl shows up.Yet Amy seems to do just fine at the ladylike hobby of pen-and-ink sketching, her first attempts “both pleasant and profitable,” suggesting that her art actually is a small relay to the comforts and refinements she seeks.

It is when she aspires to heights beyond feminine accomplishments that things go unmercifully wrong; she starts fires and injures herself and her paintings are grotesque.  Amy’s “genius” turns out to be only “‘eternal patience,’ as Michaelangelo affirms… for she persevered in spite of all obstacles, failures, and discouragements, firmly believing that in time she should do something worthy to be called ‘high art.’”

In the very next chapter, though, Jo masters popular writing immediately, and the results are completely different.  Marmee tells Jo, unlike Amy, to “[a]im at the highest, and never mind the money,” but Jo aims for the hundred-dollar prize and wins it.  In fact, her very worst writing brings money into the family.

I first read this book when I was 9, and I remember puzzling over these chapters.  If you were too feminine, the novel seemed to suggest, you’d best not attempt to do anything too lofty, but anything you humbly took up as a hobby would confirm your inferiority.  Whereas if you were satisfactorily unfeminine, even your attempts at doing mediocre work would be amply rewarded and beam a light on the greater things of which you might be capable.  I thought that  sucked.

It didn’t help that Jo’s motivation for writing bad stories was to help her family, that Jo stuck to the bedside of the most irritating character, Beth, the more irritating because I shared her nickname: Jo’s seeming independence belied an alarming acquiescence to the ideal of maternal self-sacrifice that the novel puts forth.   Whatever genius she had was firmly tethered to what her family needed from her.  Amy, on the other hand, got to go to Europe.

I think, to my eye, Amy’s excessive femininity was a way out of all that self-denial.  Sure, she learned some lessons along the way, but going to Europe mostly taught her that if you throw a lot of netting over last year’s dress, you look like a million bucks.   Amy held out for Amy, and in a novel (and a family) where doing unto others could negatively impact your lifespan (Beth and my mother both died too soon), renouncing self-renunciation seemed a lesson worth considering. My mother’s self-abnegating Stoicism was lived in a masculine mode, and I remember slamming the door on it, often violently, and going to the mall.  If I was going to be corseted, well, then, I wanted to choose my own stays.

Elizabeth Freeman: The pause that refreshes.