A Blankness Full of Meaning

During the boring, sleepless hours of a tenacious insomnia that miraculously disappeared upon my defending my dissertation, I used to entertain myself by wondering how much of Moby-Dick I could reconstruct from memory if I were ever stranded on a deserted island. Whenever I found myself growing wakeful in the night; whenever it was a dark, restless 2:30 a.m. in my bed; and especially whenever my insomnia got such an upper hand of me that it required a strong moral principle to prevent me from deliberately elbowing my wife and waking her up to have someone to talk to — then I would pick a scene from Moby-Dick and see how much of the language I could call to mind, however partially and out of order:

What d’ye do when ye see a whale, men? Sing out for him!…And what tune is it ye pull to, men? “A Dead Whale or a Stove Boat!”…at the seemingly purposeless questions…slowly rubbing the gold coin on the skirts of his jacket…all twiskee-betwisk like him him…Corkscrew! cried Ahab; aye, the harpoons lie twisted in him…aye, Tash…it is a sixteen-dollar piece…this Spanish ounce of gold…Starbuck! Hand me that top-maul…with a wrinkled brow and a crooked jaw…whosoever raises me that whale, he shall have this Spanish ounce of gold….

It was an exercise in turning my attention to something delightful and letting that delight roll around in my mind, brightening the otherwise lonely, desert-island monotony of the wee hours. This turned out to be counterproductive vis-à-vis falling asleep — it was too interesting — but it’s a thought experiment I’ve never really let go of. Indeed, to this very hour, I often puzzle myself with it.

I was overjoyed last month by the launch of a mobile app that is at once excellent training for my insomniac/shipwreck fantasy and a way to enjoy its best aspects without becoming shipwrecked or insomnious. The app, OMBY, is a game that you win by unscrambling Moby-Dick, a few words at a time. The complete text of the book has been broken into 10,395 consecutive morsels of about twenty words each, but with each morsel missing a few words, and the missing words’ letters mixed up like Scrabble tiles. Rearrange the alphabetic chaos of those tiles to form the missing words, and swipe forward to the next puzzle. Now do that 10,394 more times, in order, all the way through the book.

Moby-Dick rewards this kind of equal-opportunity close reading because every freaking page is dense with word-twisting images as aching as Bulkington’s apotheosis, as audacious as Ishmael’s sperm-hands, and as verbally disorienting as “a colorless, all-color of atheism.” OMBY is like a friend who accompanies me to the Louvre and keeps me from striding past a hundred unfamiliar masterworks on my way to see the ones I already know. In the Louvre, though, the art is already on the wall. OMBY lets me co-create Moby-Dick’s unfamiliar ingenuities, searching like Melville for the right words, massaging the letters into something meaningful.

What about this one, the third of five puzzles that comprise a sentence about crow’s nests in Chapter 35? A crow’s nest, as Ishmael explains, is a little booth at the top of a mast to protect you from the weather while you’re up there looking out for whales. To his great regret, however, the Pequod has no crow’s nests, so you are completely exposed, and very uncomfortable in cold weather. You can of course wear a coat, Ishmael observes, but “the thickest watch-coat is no more of a house than the unclad body;”

The tiles in OMBY work like dominos, or like two Scrabble tiles glued edge-to-edge: these are eight dominoes next to each other, each with a top and a bottom letter. As you move the top row of letters around, therefore, the bottom letters move too; solving one rung helps solve the other. I start by arranging the tiles of the top row into words and nonwords: TLO HOSE, HUETO LS, LUSH TOE, LE SOUTH. It’s easy to get tunnel vision here, failing to see the solution that’s right in front of you because you think you’re looking for something else. As you move the tiles around, words emerge from meaninglessness and dissolve back into it, per the book’s central interest in meaning as something we make, not something we find. I notice that the bottom rung can be made to say I SLUDGE, but this melts the top rung’s LE SOUTH back into chaos:

With the letters arranged this way, however, the top rung snaps into focus for me: THE SOUL, which surely must “reside” or “exist” or “repose” inside its fleshy tabernacle? 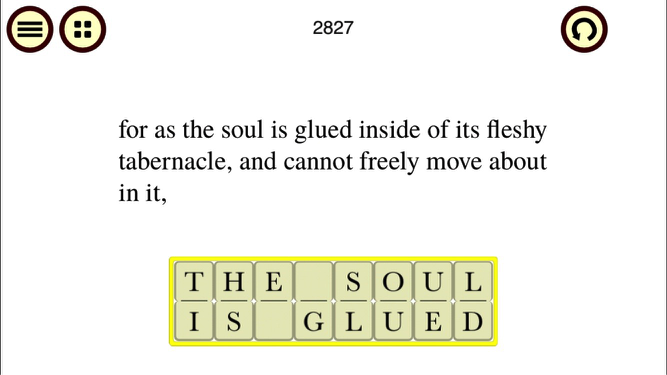 No, it’s glued there.[*] Look at the irreverent weirdness of that image: a soul with glue on it, and a hut made of skin adhered to it. I must have read through that simile a dozen times without really noticing it. That’s what Moby-Dick is like, though; there are too many of these linguistic weirdnesses to absorb on one reading or, I hope, a lifetime’s reading. You have to look at them in OMBY, though, because you are making them.

So also the book’s thousands of words that are not quite words — words not recognized by spellcheck but meaningful anyway. Worryings, nappishness, rainbowed, prolongingly, bamboozingly, untattooed, bedwards, emblazonings, allurings: familiar words in unfamiliar parts of speech, the letters a little scrambled from where we expected them to be. Their meaning is never handed to us; we’re always unwrapping it. This is why OMBY’s unscrambling gameplay is so apropos.

What does it mean that a book that looks unblinkingly at a brutal existential bleakness indulges in so much ecstatic wordplay, making and breaking meanings with such obvious pleasure? The book raises the strong possibility that everything that makes life meaningful — all meaning — is essentially make-believe. Even so, it pours its heart into making up more. After the existential traumas that the book depicts, the unrestrained vitality and sheer delight with which Ishmael (“some years” later) plays with language and meaning is why I read the book as fundamentally redemptive.

Lately I’ve made it my business to shout from the rooftops that Moby-Dick is unimaginably weirder and more playful than most people think. What I appreciate most about OMBY is that it shouts the same thing at me. I think I know what’s in this book, but it’s always fuller of strange deliciousness than I remember. While OMBYing my way through Chapter Two recently, I found myself picturing for the first time in my life “a Czar in an ice palace made of frozen sighs.” Maybe the answer to the desert-island question is that I couldn’t really reconstruct the book at all, because what makes Moby-Dick Moby-Dick is all the stuff you don’t remember.

OMBY is available for iOS devices. It costs $2.99.

Tim Cassedy is a sort of badger-haired old merman.

[*] The full sentence: “To be sure, in coolish weather you may carry your house aloft with you, in the shape of a watch-coat; but properly speaking the thickest watch-coat is no more of a house than the unclad body; for as the soul is glued inside of its fleshy tabernacle, and cannot freely move about in it, nor even move out of it, without running great risk of perishing (like an ignorant pilgrim crossing the snowy Alps in winter); so a watch-coat is not so much of a house as it is a mere envelope, or additional skin encasing you.”