At the start of Back to the Future Part III, 1985 Marty McFly must once again team up with 1955 Doc Brown—this time to go back to 1885, where a lightning bolt sent Doc Brown and his DeLorean at the conclusion of Part II. As the runway for the time machine, Doc Brown chooses that icon of 1950s suburban movie-going, the drive-in theater. And not just any drive-in, but a drive-in built in the desert, its screen framed by the buttes of Monument Valley, the swath of land director John Ford turned into a visual shorthand for the West. As a symbol of the film’s conception of the past, nothing could be clearer: Marty drives through the screen, and where he arrives is less the real American West than the movie version of it. 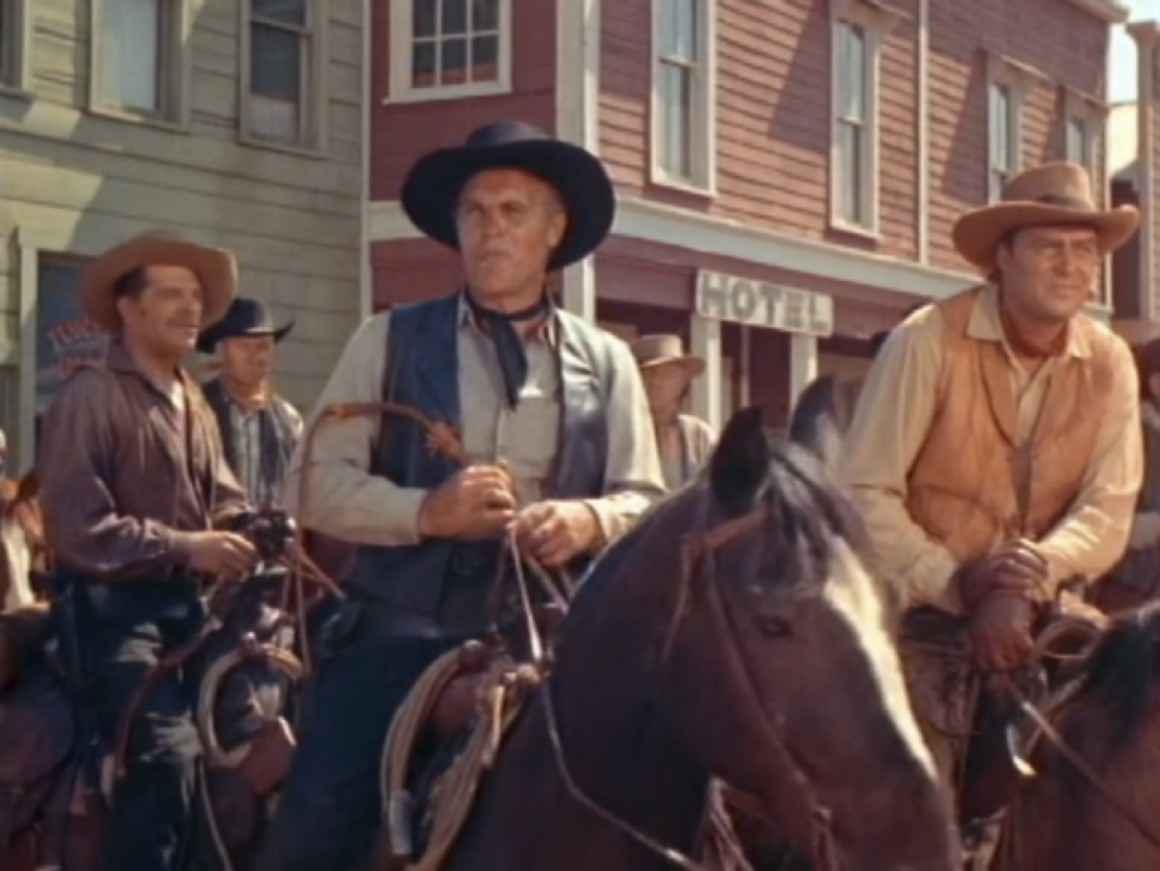 Back to the Future’s 1885 revels in the visual and cultural inheritance of Western films and television series of the 20th century, from the revered works of John Ford and Sergio Leone, as well as the more mainstream fare that Zemeckis and Gale’s generation grew up on — the Westerns of Audie Murphy and Randolph Scott, Roy Rogers and Tex Ritter. Take the villainy of Mad Dog Tannen (Biff Tannen’s great-grandfather) and his sidekicks, a comic exaggeration of the gangs of criminals and wrongdoers that roved through Westerns like Dodge City (1939) and The Lone Ranger (1956). Tannen and his sidekicks dress in a dustier shades than the Technicolor villains that preceded them, but the headgear is the same – black-hatted villainy is black-hatted villainy.

The film’s affection for the Old West of Old Hollywood is everywhere in the film, perhaps most charmingly in the three-man Greek chorus in the saloon. Commenting from the sidelines are wizened character actors — a Ford stock company member and scion of a silent film cowboy (Harry Carey, Jr.), singing cowboy Gene Autry’s longtime sidekick (Pat Butram), and a veteran of too many Westerns to count (Dub Taylor). Marty tries to pull in the grit and aggression of the 1970s through his persona: he takes on Clint Eastwood’s name; he finds a poncho to help him look more like The Man with No Name; and in one moment, alone with a mirror, he imagines himself a 19th-century Travis Bickle (“You talkin’ to me, Tannen?”). But while Marty may have seen some of the revisionist films of the 1960s and 70s, the larger film takes its cues from more traditional Westerns.

That Back to the Future Part III takes place largely in a 50’s-movie-West (rather than a historical West) is clear, too, in its treatment of race. Part III encounters and ignores the racism that structured the Westerns it borrows from. The Western is a genre that places white men at the center of all of the action, focusing on their struggles to establish civilization in the American West, while understanding “civilization” to be a place where white men rule over the land and over the other people and groups who inhabit it. 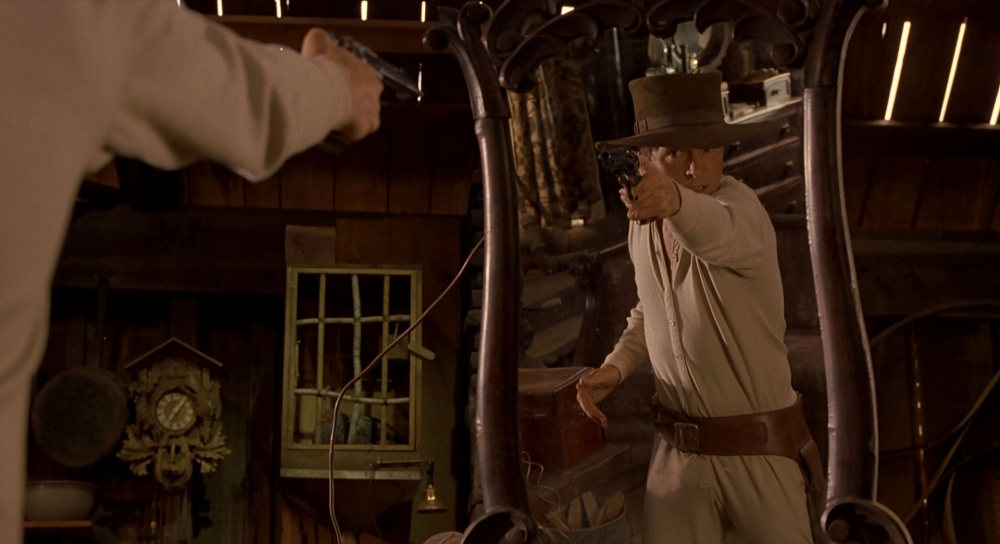 At the margins of these stories are women, Native Americans, Asian migrants, and other minority groups. At the drive-in, Marty notices the mural below the screen: a row of Native Americans charging toward the viewer. “Doc, if I drive straight toward the screen,” Marty says, “I’m going to crash straight into those Indians.” Doc explains that in 1885, “Those Indians won’t even be there.”

At first, Marty is right –when he first flashes into the past, there the Indians are, as in the mural, faces painted, making war whoops, unmotivated and uncharacterized. But within a moment, it turns out that Doc was right—the Indians charge across, and then off the screen, never to be seen again. A Chinese migrant named Wang also makes a brief appearance, attending to cowboys at the town bath house. But the rest of the film is left to the white men and their burdens.

Part III’s real disruption of the Western resides in Clara Clayton, the scattered schoolteacher (played by Mary Steenburgen) Doc saves from tumbling into a ravine. It isn’t the character that’s so striking—Westerns often use forthright-if-hapless women to comic effect (Clara is a slightly more screwball, more prim version of Angie Dickinson in Rio Bravo.) And much of their courtship is comfortably familiar, including their first date, which involves a dance at a community celebration – one not unlike the celebrated church-raising sequence in Ford’s My Darling Clementine. The Hill Valley band (ZZ Top in a cameo appearance, their beards almost blending into among the 19th-century facial hair) even plays “My Darling Clementine” as a nod to the classic.) 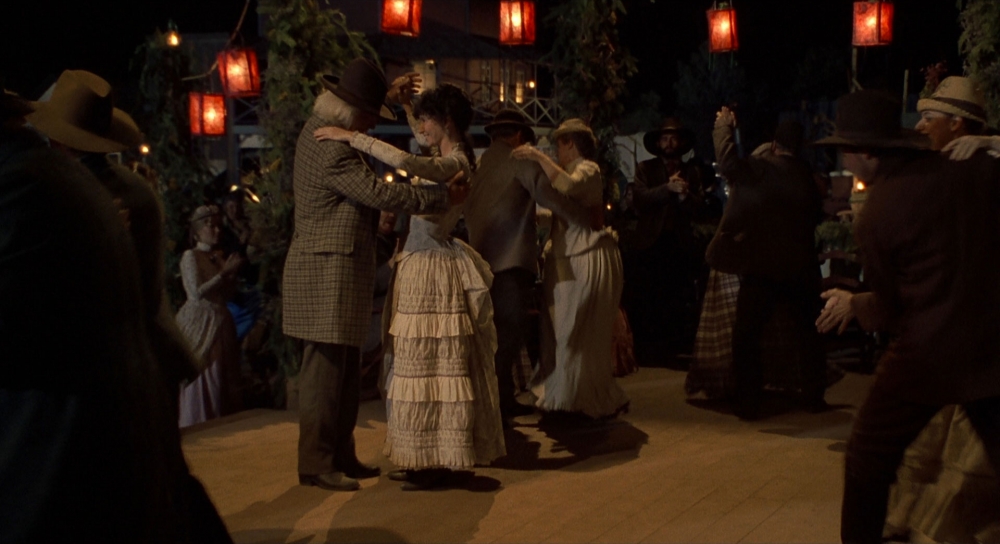 What is delightfully different from the world of the 1950s Western is the source of the connection between Clara and Doc—science. They share memories while gazing at the night sky, they discover that they both love of the stories of Jules Verne, and they share their first kiss in front of a telescope. It’s more than uncommon for a Western, comic or serious, to look to science – not the application of technology to support development, but science as an impractical, creative endeavor – as a source of promise for the future.

For the majority of its running time, Back to the Future Part III is simply a comic Western, a return without revision to the narrative world of Westerns like Cattle Queen of Montana, the Ronald Reagan-Barbara Stanwyck film showing at the Hill Valley movie theater in Part I. But for a few minutes, Doc and Clara find a space to imagine the future not by looking across the land and seeking to conquest, but by looking at the sky in wonder. Through them, Part III presents to its audience a past outside of Western tropes, a past with its face to the future.