Watching a Little TV for a Change

When Marty jumps forward 30 years to 2015 at the start of Back to the Future Part II, he walks around Hill Valley mesmerized by a wild array of technological innovations: flying cars; hoverboards; self-fitting clothing; an automated Texaco station; and a holographic shark descending from a movie theater marquee (Jaws 19, “This Time It’s REALLY REALLY Personal”). It’s now 2015, and many a fan has lamented how few of these predictions have come to pass. But Part II’s most accurate forecast now seems comparatively banal: in Marty McFly’s future living room, a flat, widescreen television hangs over the fireplace, precisely as similar TVs do in many a real 2015 home. Television sets, in fact, operate as one of the trilogy’s cleverest barometers of technological and social change: the central object in its Carousel of Progress and ours.

TVs are hard to ignore in the Back to the Future trilogy: in the opening credits of Part I, Doc Brown’s “wake-up-machine” turns on the TV automatically. A few scenes later, when Marty sits down for dinner, his father is painfully distracted by a re-run of The Honeymooners. 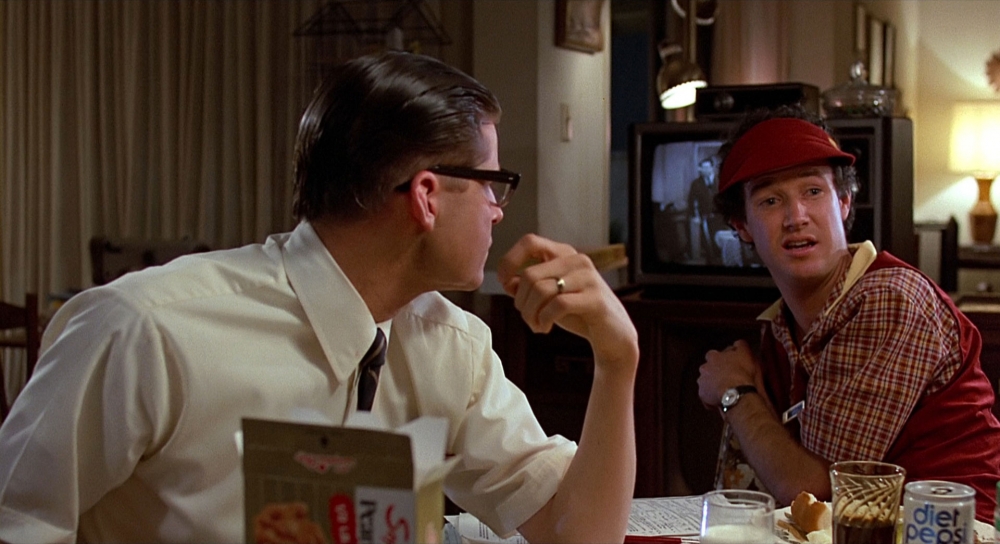 The very prominence of TVs in the trilogy reflects the social anxieties of the years in which the films were made—from 1985 to 1990.Watching too much TV—especially at the dinner table—seemed to many observers in the 1980s a distinctly contemporary threat to family life—fueled by the advent of cable television and VCRs, and the steady rise of households with two or more TVs.

But TV changed family life—and fueled anxieties about family cohesion—from its very beginning, as Back to the Future knowingly portrays. Television makes its historic debut in Part I: transported to 1955, Marty sits down for dinner at the home of Lorraine Baines, his mother-to-be. It is the very day her father Sam has bought their first TV. The table is already set, when Sam proudly wheels the antennaed TV into the dining room: “Look at it roll! Now we can watch Jackie Gleason while we eat!” The Baines would have been in good company: the mid-1950s were, in real life, a turning point in TV sales. From the late 40s to 1955, TV prices dropped by half, and rates of TV ownership rose to two thirds of all American homes. (That rate would jump to 90% by 1960.) The Baines home also suggests the changing place of television: The earliest televisions were built to resemble wooden furniture, but they became increasingly modern and portable beginning in the mid-1950s.

The scene is one of the film’s many disruptions to what Stephanie Coontz called the “nostalgia trap.” In her book The Way We Never Were, Coontz argues that “nostalgia for a safer, more placid past” has encouraged “historical amnesia.” That amnesia is pointedly broken in Back to the Future: as the Honeymooners airs in 1955, Marty realizes he has seen the episode before—it is the same episode his father was watching in 1985. His family’s TV troubles, it turns out, are a re-run, too. In 1982, Joan Anderson Wilkin’s Breaking the TV Habit was the first of many popular works that would encourage parents to “control” their family’s TV viewing. But Anderson also singled out the movable “TV table” for disturbing the halcyon days of early broadcasting—with limited channels, limited programming, and most importantly, limited portability.

The problem, as critics in both 1955 and 1985 understood it, was not television itself, but television without limits. As historian Lynn Spigel shows in Make Room for TV, some early observers thought TV would foster family “togetherness,” but many others saw it as a source of alienation—displacing the fireplace, undoing paternal authority, seducing the innocent, and disrupting everyday family life. In Back to the Future, the impact of television is never a question: from Lorraine’s father, to Marty’s father George, to Marty’s son, television registers first and foremost as an icon of stunted masculinity and failed fatherhood.

The trilogy’s anxieties about televisual takeover are nowhere more clear than in 2015. When Marty Junior gets home, he crashes in front of the flatscreen TV—watching six channels at once, barely looking up when his father gets home: “Watching a little TV for a change?” Marty Senior jokes. But that’s only the beginning. TV screens are embedded in nearly every wall of the future McFly family home. The window-shade is a screen, too, airing the “Scenery Channel.” And, at the dinner table, Marty Jr. and his sister Marlene (both played by Michael J. Fox) wear headsets—Marlene to talk on the phone, but Marty Jr. to watch the “Atrocity Channel.”

But no matter the number of stations or devices, no matter the year, the Back to The Future movies envision the same result: : the disruption of family connection. (Marty has to go to the McFly family farm of 1885 to find a household free of television, the fireplace blazing behind the dinner table.)

It’s no accident that the trilogy’s biggest losers are also its biggest TV watchers: the 1985 George McFly seen at the start of Part I, and Marty Junior—the two men Marty must save. As Guy Debord might put it, “The spectacle is the bad dream of modern society in chains, expressing nothing more than its wish for sleep,” or more bluntly still, “It is the sun that never sets on the empire of modern passivity.”

That passivity is also distinctly classed. As Richard Butsch explores in Citizen Audience, so-called “passive” TV viewing—without regard to content or time—has long been characterized as lower-class. And in Back to the Future, the McFly family’s social and economic fortunes are frequently signaled through the degree of audiovisual encroachment. When Marty returns to 1985 at the end of Part I, he discovers he has, in fact, altered his family’s history: their once-dark living room is now a beacon a 1980s interior design, with cream-colored couches, modern art prints, and gold sconces. His brother and sister, nearly erased from existence, are dressed in business-wear, eating breakfast, just before their mother and father arrive home from tennis. The TV is nowhere to be seen.

Yet the transformation of Marty’s biological family is only made possible by Marty’s queerer kinship with Doc Brown—a bond deemed “dangerous” by the humorless administrator of Marty’s high school. The lasting lesson of Part I is, in fact, passed from Doc to Marty to Marty’s father and back (in the new and improved 1985) to Marty: “If you put your mind to it, you can accomplish anything.” Their relationship is almost entirely unmediated—except to watch Marty’s home movie of Doc’s time travel experiments. The underlying anxiety of the trilogy’s TV portrayals is not, in the end, spectacle, but background noise: audiovisual entertainment made ordinary.