More than most movies, Back to the Future (1985) begs to be revisited: the movie and its two sequels (released in 1989 and 1990) are obsessed with repetition, re-viewing, and revision. The year 2015 also marks the very “future” promised by the trilogy—its furthest leap forward in time—a moment eagerly (very eagerly) awaited by fans. In recent months, many fans have looked back to the movies to consider what they got right and wrong about 2015. But the 30th anniversary also offers a chance to consider how the movies themselves looked back to the past even more than forward—and to reconsider their original and lasting appeal. 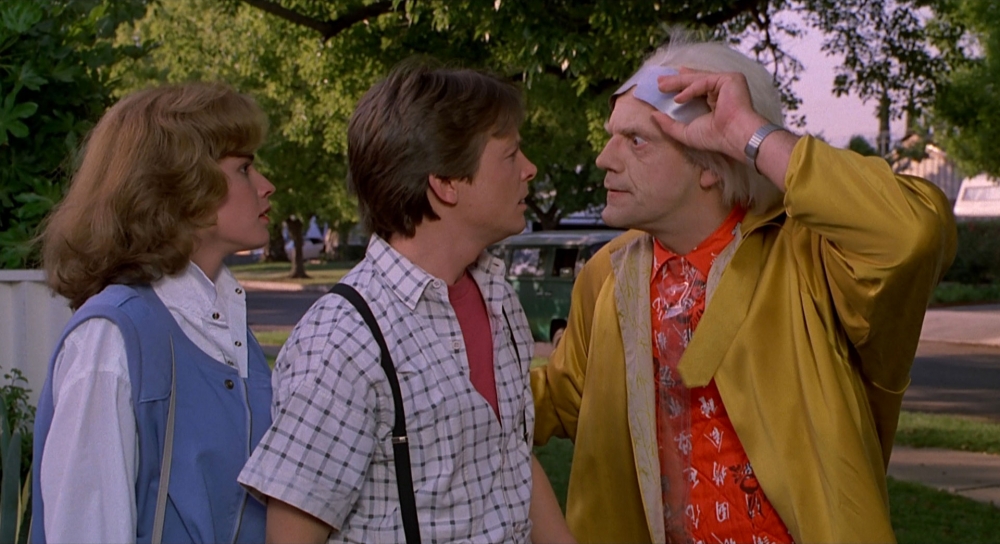 The first film, starring Michael J Fox (best known at the time for Family Ties) and Christopher Lloyd (best known for Taxi) was both a critical and commercial hit. In fact, creators Robert Zemeckis and Bob Gale did not originally plan it as the first part of a trilogy. The movie ended with a cliffhanger, but it was only when it was released on VHS that the words, “To Be Continued,” were added at the end. The trilogy’s status as a classic of American movie-making owes less to its cinematography or special effects than to its ingenuity: the three movies are together an unprecedented mix of sci-fi and comedy—a time travel trilogy as interested in the fate of its heroes as the history of American film and the trajectory of American society. More than simply nostalgic, Back to the Future played on familiar genres and forms—sci-fi serials, Westerns, teen dramas—at the same time that it unsettled historical narratives of decline and progress, from the 1950s, to the 1980s, and beyond.

In honor of the occasion, guest editors Stephen Vider and Wendy Allison Lee have curated a group of Avidly essays that each take a different angle on the trilogy’s deeper workings. Eitan Kensky examines Part I’s detailed use of technology, both the mechanics of time travel and Marty’s personal electronics. Stephen Vider considers how Parts I and II refract 1980s anxieties about television and the family. Wendy Lee considers the unexpected Asian presence of the future Hill Valley. Corey McEleney reexamines the queer temporality of “Hell Valley,” the altered 1985 of Part II. Looking back at Part I, Maggie Greaves explores the afterlife of 1950s Cold War containment and invasion narratives. And Claudia Calhoun considers how Part III revisits the tropes and ideology of 1950s Westerns. Together these essays aim to take the pleasures of Back to the Future seriously — and to encourage more looks back.