An embodied meme, or a bodily metaphor redoubled: what goes viral is always already rooted in our sense of shared—but decidedly unequal—vulnerability. If this is a visceral phenomenon, it is also visual one; “hands up” circulates as rallying cry, as status update, but most of all as image. This week in class, in disbelief and mourning (and surely a range of other feelings), we look at John Dominis’s photograph of John Carlos and Tommie Smith, first and third in the men’s 200-meter sprint at the Mexico City Olympics in 1968, raising their gloved fists in protest. And then we look at Jeff Curry’s digital image of St. Louis Rams players Jared Cook, Kenny Britt, Stedman Bailey, Chris Givens, and Tavon Austin, arms raised, in a similarly high-profile gesture that lingers somewhere between a sign of solidarity with protesters in Ferguson, Missouri and the official gesture for touchdown. Such bodily gestures, recorded visually, emerge as mute but powerful protest against the ostensible neutrality of whatever officiates our various playing fields.

In recent weeks and months, the power of the gesture has never been clearer: “hands up” transforms the visual sign of surrender into one of political resistance. Nevertheless, it’s worth looking at the complex cultural and historical work the move engages—the multiple moves it makes. As my students register, “hands up” isn’t quite the Black Power salute, given that it rehearses a moment of full-body interpellation by the police. But as one student observes, part of its force is rooted in this very repetition. To throw one’s hands up in the stadium, in the street, and (perhaps most powerfully) for the camera is to convert that gesture of surrender into something else: a shared performance that makes visible the deeply historical and split-second choreographies of power in which bodies deemed criminally other—deemed threatening, which is to say deemed black—become the objects of state violence. “Hands up” cites and reroutes these choreographies, a physical disruption not unlike playing dead in solidarity with the dead, a form of protest to which it is closely aligned. 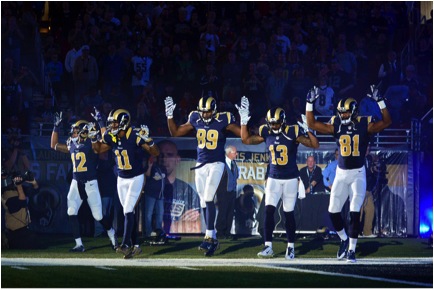 “Hands up” demands we inhabit at least two bodies at once: we are the dead or the soon dead, and we are those left to mourn. As a gesture of mourning, “hands up” registers grief’s capacity to collapse time, to unsettle the boundaries between the living and the dead, to disorder logic and language. Grief also manifests the disordered logic and language of the police state: bodies left in the street become, unforgivably, what Robin Bernstein describes as “scriptive things,” things that force us to confront the proximity between humans and objects, and that in turn script the behavior of our material bodies-as-things. Language does not and cannot suffice; in response to bodies, we use our bodies. The gestural script prompts a form of kinesthetic memory and mourning—experienced at the individual level, and mobilized as collective resistance to state power. With our hands up, we honor and mourn individuals, but we also block traffic, we delay holiday shopping and tree lighting (the chrono-topographies of capitalism), we flip the script on how certain bodies should move through certain spaces. “We” as a

As a script, “hands up” always threatens to flatten the difference between subjects coded differently. Yet it also offers a critical lens onto the way such codes of difference have been historically visualized. The camera, too, is a scriptive thing; we perform for and through it (whether cell phone or telephoto lens). All semester in class we have struggled with the power of the camera, its long intimacy with criminology and race science, its status as yet another site where the ostensibly neutral practice of criminal identification works to produce and police racial difference. This without any recourse to the metaphor of the camera-as-weapon, or to the split-second gesture (touching a button, pulling a trigger) that transforms bodies into objects, commodities that circulate. Photographs, as Frederick Douglass argued in 1861, make man “a fixed fact, public property.” Similarly wary of the photograph’s capacity to reproduce the object-status of black bodies under chattel slavery, Sojourner Truth insisted through her popular cartes de visite that she sold the shadow, not the substance.

To perform for the camera might be to insist then—as Douglass and Truth did—on the unfixing of the photograph’s complicity with state power, with objectification, and with death. The camera is not neutral and it cannot save us, as it did not save Eric Garner, or secure justice for him. But hands up for the camera calls attention to America’s long history of conviction and punishment on site/sight. Transmuted from a gesture of surrender to a gesture of solidarity, hands up refuses the logic of racial enforcement. In its place, it offers identification with a difference: our bodies uneasy surrogates for what has been irretrievably lost. So get those hands up.