To What End, the Brain Fart?

Recently, I showed my grandma some highlights from Amanda Bynes’s notorious twitter activity last year, to which she responded: “Why should I care about the mishegas of this poor young girl.  What is the great importance you see in her brain farts?” Her response stuck with me.  Why did I consume Bynes’ self-disclosures so excitedly?  Why do I desire such proximity to the outrageous body of the celebrity? In the era of the micro-blog, we have gained greater access to the more banal, personal, and intimate registers 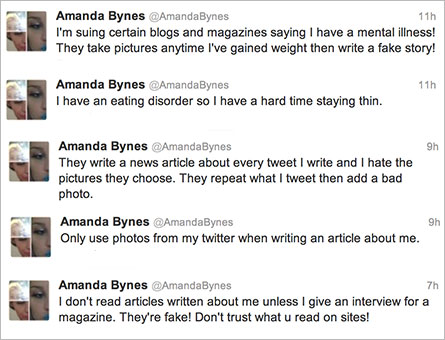 of other people’s lives—an endless cloud of brain farts.  What does this description tell us about how we understand digital discourses and the body? Are the thoughts expressed on Twitter abject, meant only to be waved off or ignored? Or are they an important trace of the eruptive body, in an increasingly disembodied digital world?

Micro-blogging has created a new social scale in which we feel so close to each other that we must use olfactory metaphors to describe our digital expressions.  The so-called global village has become so dense that we can digitally smell each other.  The metaphorics of flatulence not only convey the disgust many feel at over-sharing, but also describe an uncontrollable, “irrational” digital body that is at war with our fantasies of rational public discourse. An economy of attention and affect determines how tweets circulate without any regard to standards of communicative rationality.  Users retweet popular tweets because of their affective content, their capacities to wield our emotion and attention.  We retweet when something makes us laugh/outraged/amused/shocked/curious/repulsed/confused, if only for less than a second.  Twitter haunts Jurgen Habermas in his nightmares.

I embrace flatulence and other assumedly repellant processes of the body disallowed by normative social comportment.  Many cannot hold back their farts.  People may flatulate to relieve pain, to release toxic digestive gas, to feel more present in their body.  As someone with digestive sensitivity I can speak to these experiences.  But I am also someone with a case of the brain farts.  Perhaps because of my own cognitive distance from the norm, I engage frequently in what the autistic community refers to as “info-dumping,” or the compulsive sharing of information which might be understood by others as “irrelevant.”  I can feel an infodump

coming from inside me, and I usually choose to make myself uncomfortable to protect the comfort of those around me.  I frequently imagine how my life might be different if I could brain fart more freely, or with greater control.  I use micro-blogging as a pressure valve, a way to free my cognitive bowels and experience some communicative catharsis.  I invoke this experience not simply to share how Twitter might be helpful for people who “infodump,” but in order to inquire about how we describe different modes of communication in discourse. What forms of expression are fragrant or repugnant?  Should we prioritize certain forms of relating to the world in order to protect the comfort of some? What if we could communicate in ways that made us feel more at home in our bodies? What are the possibilities of the brain fart?  How can we brain fart together in solidarity?

Perhaps Twitter operates more as an affective pressure-valve than as a space for deliberative democracy.  Sorry Habermas.  Twitter offers refuge to the over-sharers, the hyper-communicative exhibitionists, the abrasively chatty.  But I do not want to think of Twitter as some utopic ecology of neurodiversity.  Let us hold onto, but not get too carried away with utopian feeling when thinking through our digital flatulence.  We should flatulate, yes, but we should also think about our flatulence. For example, I want to be thoughtful of the whiteness of farting.  Who does society give most sanction to make fart jokes in public?  White dudes.  To fart freely and without consequence is a privilege not usually afforded by disabled or sick people of color… even when such pressure to maintain a respectable embodiment in public can cause long-term violence to the body.  Keeping the metaphorics of flatulence in mind, I further ask: How much can one share about themselves online and still be considered worthy of respect?  Who gets to glean social capital from tweets about their “BMs,” and who would get criticized for conveying “TMI”?  Certainly race and gender play a part.

The idea that communicative capitalism has co-opted all of my precious cognitive flatulence makes me feel uneasy.  I am very concerned about what Brian Massumi has referred to as the “subsumption of life” under capitalism.  Twitter operationalizes my microcognitive expressions, what I have been referring to as “brain farts,” toward the accumulation of capital.  Once stigmatized perhaps for its unproductivity, its frivolity, its “uselessness,” corporations can now capitalize from the “brain fart.”  Perhaps my attention to the flatulent follows a changing trend within the dynamics of capitalism itself.