Books You Should ReadPopular FictionsWriting

The Pixies Film That Never Was

Why did Black Francis take this long to write a graphic novel? Sure, he’s been busy of late with reunion tours of both the actual Pixies and their more recent and inexcusably Kim Deal-less zombie incarnation (in that one, audiences must suffer not just listless performances but the travesty of hearing somebody not Kim sing “Gigantic”).

But it seems like the form’s filmstrip-like qualities would have appealed to the cinema-obsessed Francis years ago. The man who came up with the heaving stewpot that is “Debaser” (“Got me a movie / I want you to know / Slicing up eyeballs / I want you to know”) and the seething savage hopelessness of “Wave of Mutilation” (“Cease to resist, giving my goodbye / Drive my car into the ocean”) never read like an artist who would be content with sound alone. Vision should surely have followed. 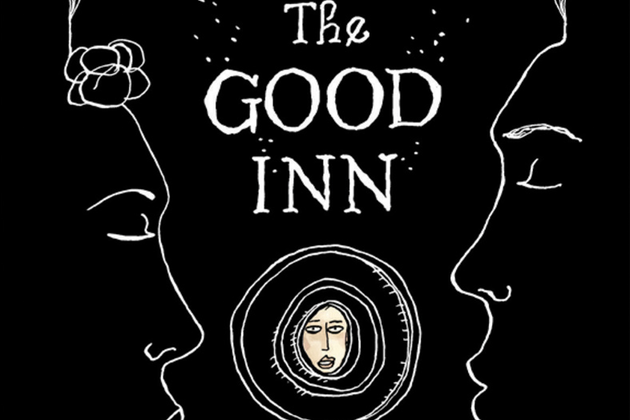 Somewhere in the antic attic of Francis’s mind—and yes, here we must conjure up a steampunk laboratory with stacks of yellowing penny dreadfuls, Tesla coils spitting electricity, and exotic creatures preserved in heavy glass vitrines—there must have been ideas swirling about this kind of thing. His songs always throbbed with the sound of an imagination bursting at the form’s seams, trying to stuff as much into a rock song as it could hold without bursting into flames.

In a perfect world, The Good Inn would have been the great summing-up of all that Black Francis had to offer. On paper this reads like a laundry list of his influences and obsessions: stiff early avant-garde-isms, genre-bursting quirks, historical oddities, and pornographic interludes. But, then, in a perfect world—not our mercantilist one where the bands of our youth are forever marketed back to us in a dimming spiral of nostalgia—the Pixies would have called it quits once Kim left for good.

As the band’s lead songwriter and head yowler, Black Francis never lacked for subject matter. He wielded his interests and influences like he did his guitar: with slash and burn intensity and a catholic approach to material. Religious iconography, surrealist imagery, pulp science fiction, and oddball Spanish references were all incendiary grist for the mill. Listening to Francis’s songs are like seeing clips from a sprawling avant-garde film experiment set to squalling sheets of noise. Although those yelping sonic stories are close to literary rock perfection, they always had an unfinished quality to them. Dreams interrupted. Gutter epiphanies. Sketchbook scribblings set to four-four time.

That’s how it is with the lavishly produced but underrealized The Good Inn. Co-written with Josh Frank and illustrated by the great cartoonist Steve Appleby (who drew the album cover for Trompe le Monde), it’s a seemingly perfect Francis project, all deadpan absurdisms and cockeyed vignettes. The book is awash in Franco- and cinephilia, almost debilitatingly so. Frank’s introduction lays out how the two of them cooked up the project as a multimedia ode to shared joys: “Charles [Thompson, a.k.a. Francis] loves movies, movie theaters, and music, and man, does he love France. So in many ways The Good Inn is the ultimate love letter to all of the things that fascinate him.” Subtitled “An Illustrated Screen Story of Historical Fiction,” The Good Inn weaves together two snapshots of modern life and mines them for every granule of explosive serendipity.

What you have is a drifting story about a callow youth, Soldier Boy, who survives the accidental explosion that destroyed the docked battleship Iéna in 1907. As both protagonist and narrator, he takes a picaresque journey that includes him starring in The Good Inn, possibly the world’s first pornographic film. Both historical events are hinged on a nearly too-perfect fact: the same volatile propellant that destroyed the Iéna, nitrocellulose (also known as guncotton) was also the primary base for film stock in the nascent cinema industry. Later, reels of many early silent films were actually repurposed in the weapons industry after the start of World War I.

The book is a knocked-together thing, structured as an illustrated screenplay that intersperses dry, ironic dialogue (“Paris can be a very intoxicating cocktail, unlike this meddlesome milk”) with straight prose, silent-film title cards, and Appleby’s colorfully woozy drawings. Soldier Boy’s narratively convenient wandering lets Frank and Francis layer in references to early cinema, Méliès, Toulouse Lautrec, and Collette. That’s before they fracture the narrative with dopplegangers and a continually doubling-back self-referentiality. Like the circular spiral of art and destruction signified by the guncotton holding the story together, the book implodes upon itself on multiple occasions.

The authors gamely try to conjure up the thrill and danger of the Belle Epoque’s briefly gleaming, rough-edged era. But like too many works of the pretend avant-garde, though, it’s a facsimile piece. The creators’ restless interests and magpie eye for detail never compensate for its laissez-faire attitude toward cohering into something other than simulacra.

The Good Inn reads like an outline for a concept album, a screenplay never meant to be produced, a story that wants to be told but resists all form of telling. This is fanboy stuff, not the real thing. In the end, it’s not too different from the zombie Pixies who now stump along, disconnected from the 1980s underground ferment that first spit them up. One would have imagined that you could never hear the Pixies were coming to town, down a member or not, and not bum-rushed the ticketing queue. But then, a fake is a fake is a fake. Better to leave well enough alone.